Had a switch lite in need of a new USB port and battery. Verified the board was booting with a known good battery. Then i replaced the USB port, port removal and installation went as well as the others I had done that day. No shorts on USB, diode readings are normal, but now when I hook up the battery it does not boot or give any indications of booting.

No shorts on the board, M92 and BQ appear to be working just fine, I am seeing all power rails around m92 / BQ and I get the 1.8 rail over on the max IC. No shorts and readings look normal around the fuel gauge as well.

I really dont feel like the USB-C port is the issue here, but when I get a moment today I am going to remove it and try to boot it just from battery. Just curious if there was anything else I could be looking at as all my usual suspects seem fine and this board was fully functional before the port swap. I know the RAM chip is fairly close to the port, but I really don’t want to go mucking about with that unless I absolutely have to. Visual inspection doesn’t show anything missing on or around the port either in terms of SMD stuff.

Any ideas would be appreciated and once i get the time to get the port off today, ill report back and see if anything has changed all that I don’t see that happening.

How is Max17050 fuel gauge ic? What voltage do you get after hitting power button around max77812(south of CPU)

great call @jkyoho looks like my 17050 had a ball merge (grumble). The small cap to the right of that in the image displayed a short to ground, took a look at the fuel gauge and saw the issue.

Ill just order up some new ones and add them to the parts bin for later.

Great finding. Switch lite port replace is too close to fuel gauge ic. Unless using kapitan tape and point away from ic, taking out bad port with hot air+flux usually would messup that little guy

Oddly enough i WAS using kapton tap around that ic. I wonder if maybe the tape was putting pressure on the fuel gauge and caused the balls to merge. I had my air set to 440 so that i could do the port swap as fast as possible, had done two more just prior to this one with zero issue, so im guessing i must have had the tape on too tight or something. I put a little thermal pad across the battery and fpc connector up top, then secure that down with kapton tape. Just a little extra protection against melting the two top connectors and blowing off passives below, but i guess i screwed it up with this board.

got some new fuel gauges coming from china now, but I think I may try my hand at reballing this. I have a reballing jig and paste / balls, but ive never done this work before. Seems like a great candidate for a first try with only 9 balls. At worst, if i screw up, I have replacements on the way. Can’t hurt, right?

well, had some time so i pulled off the chip and cleaned up the pads. Soldered the chip back on and the board came back to life. My power button and both volume buttons no longer work so now I’m diagnosing the daughterboard to figure out what the hell happened. Swapped out the flex cable with another and no joy, so issue lies somewhere else. I do see continuity from flex cable to connector to passives to other flex cable, so not sure what I’m missing but im sure I’ll get it at some point.

Maybe dirty Connectors, is flux inside the fpc?

Do you see the continunity after the 150ohm resistor on the red line(from pic) to the mainboard side pin12(count from letf)? 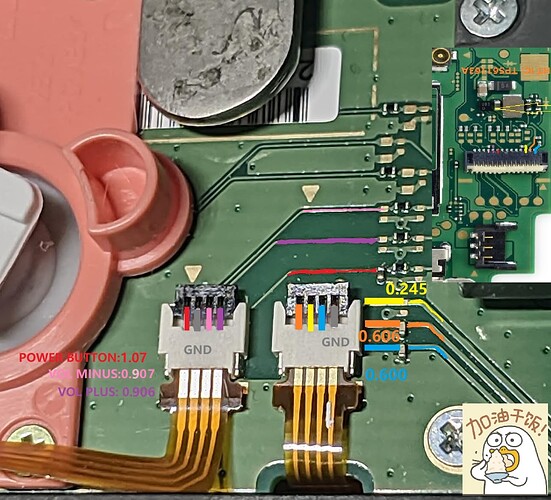 sure do, i think its the mobo fpc connector acting weird. Now i can get the power flex cable to work, and both volume buttons, but my backlight just went away. So something must be odd with that connector. Actually came back here to get the exact picture you posted to do some continuity tests.

had a few minutes to play around again. This is a weird one now.

1.) Power flex cable is now working
2.) No backlight (LCD and digitizer both function. I can see screen with flashlight, and touch controls work)
3.) I have continuity on all points listed in the above photo
4.) I am only reading 4v on the backlight circuit all the way up to the backlight flex cable on the daughter board

I want to keep blaming the connector, but if i have continuity from one board to the other all the way up to the backlight flex, i should be ok here right? I know the backlight circuit is supposed to be reading around 17v on full brightness, so what is the thing that tells the circuit to do that? Everything else functions, its just the backlight, but as far as I can tell everything is connected properly for it to work (and it was working just a few hours ago once i re did the fuel gauge). I even tossed the mobo into my test shell and the problem followed the mobo, so it must be somewhere on the board.

You mean you have 3 backlight ciruits(orange, yellow and blue) continuity from backlight flex to mobo, correct?
What voltage do you have when Switch lite turns on, at the inductor(Vin marked in yellow)? Inductor/coil is located just above the mobo 29pin fpc 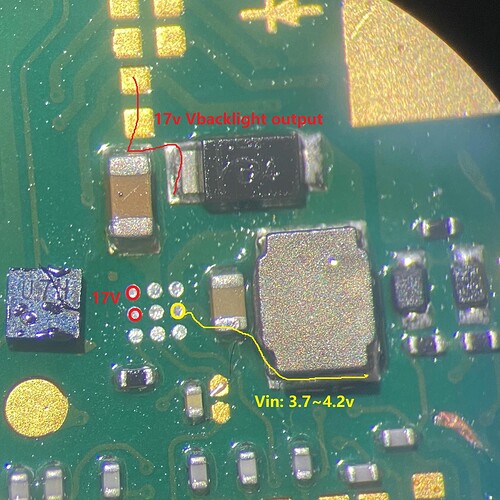 Yes, all three pads on the daughter board have continuity through the flex to the mobo. The only difference i noted was my blue line had continuity to the top of the blue passive on the mobo, not the bottom as you have pictured.

inductor voltage reading, and all other passives that had voltage in that area, is 4 volts. Same 4 volts shows up on the backlight connector as well.

at this point I am convinced it is just a connector issue. Had a minute today and decided to throw the board back into the test shell I have. When I made the swap all of a sudden I got the correct diode readings on the third backlight pin, and I also had continuity where I should on that passive. Booted the board up and the backlight came on, but the issue of the power ribbon cable not working came back. Then I put the board back into its own shell and lost the connection on pin 3 again. Thankfully my ali order containing a bunch of these FPC connectors showed up today, so Ill just put a new one on and see, I’m guessing the new connector will solve my issues and I can button up the console and ship it off to a new owner.

Well I replaced the connector and still had the same issue, swapped out the daughter board and everything started working again. Wasn’t able to track down what’s wrong on the bad daughter board but I set it aside for later. Really weird, I had continuity between the two connectors on the daughter board, but if i tested from the backlight connector to a passive on the mobo, there wasn’t continuity.

Got it firing up and fully functional again though so at least I was able to button it up and call it a day.