This unpatched switch does not boot. There is no signs of prior rework and no signs of dropping damage or liquid damage. The owner said it has been used only on stock fw and it was sitting on the official dock for few months without use and now it didn’t turn on anymore.

When I plug the charging cable (draws current at 0.4A) there is only black screen and most likely goes to autoRCM mode. I can run Hekate (without jig) but I cannot launch the eMMC (failed to init).

I have tested it with a known good battery. I checked the USB-port with breakout board and everything looks normal. I couldn’t find any shorts on the caps of M92, BQ, P13, MAX77620 and inductors were not open line. BQ diode values also look normal (and voltage were 15V and 4V), at M92 I get 3.3V and 1.8V

Is the eMMC corrupted? How can I verify it?

Based on this forum the problem could also be on the fuel gauge IC (MAX17050) or on CPU buck failure MAX77621. How can I troubleshoot these chips?

What other troubleshooting I can do with Hekate? 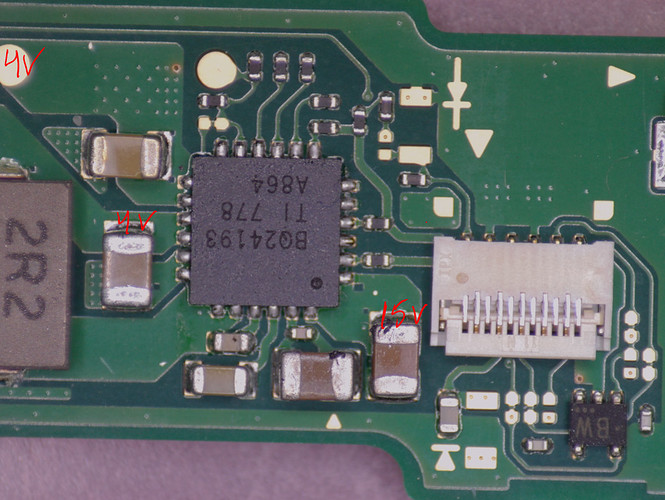 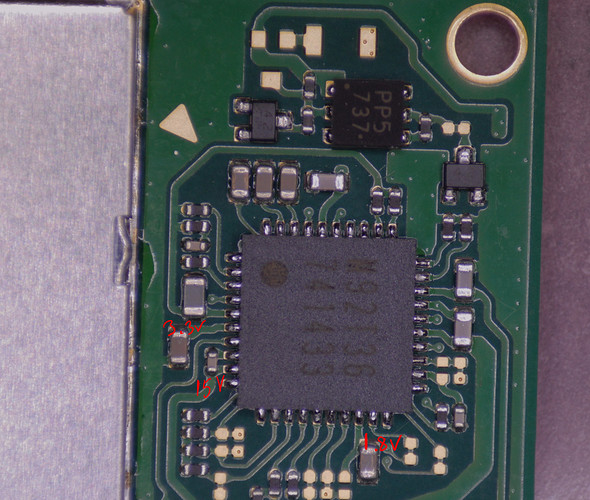 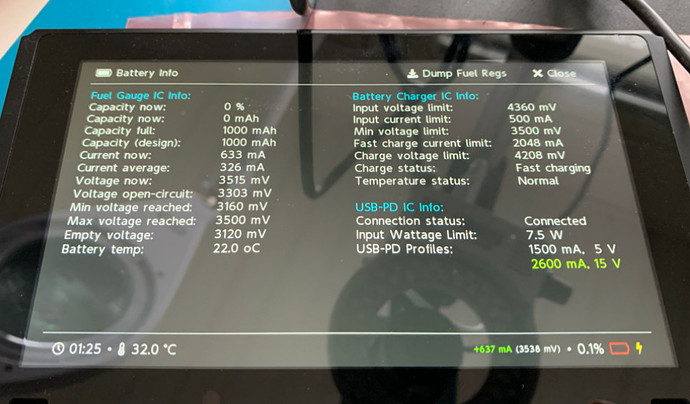 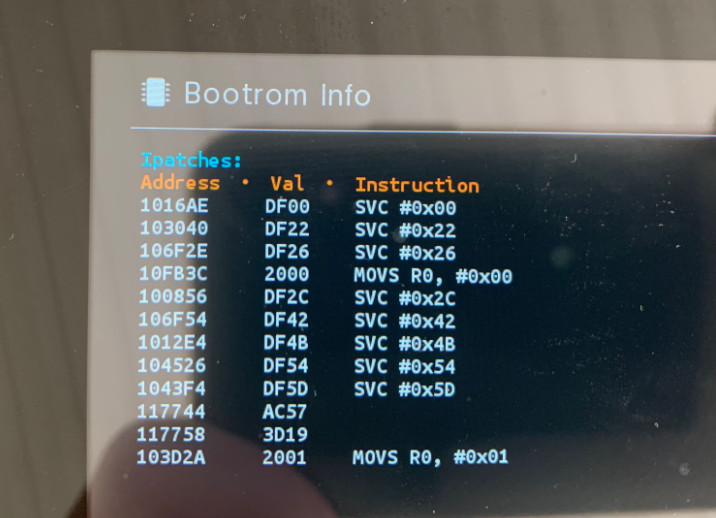 BQ, M92, and Fuel gauge seem fine afaict, though it doesn’t hurt to let the battery charge up a little just to verify.

What’s your resistance to ground on 1V8PDR and 3V3PDR, these rails are needed for EMMC and if either are being pulled low can cause the failed to init issue,

It’s also worth doing a diode/resistance check on the EMMC connector on the board and verify all lines are good.

How can I troubleshoot these chips?

Though it doesn’t always give conclusive results, you can measure resistance to ground on the inductor output and compare to a known good, then switch polarity.

What’s your resistance to ground on 1V8PDR and 3V3PDR, these rails are needed for EMMC and if either are being pulled low can cause the failed to init issue,

It’s also worth doing a diode/resistance check on the EMMC connector on the board and verify all lines are good.

I did diode check on the eMMC female connector and the values were close to Calvin’s.

Ubuntu does boot. and charging current draw is at around 1.7A. To which inductor you are referring to? I’d guess that since Ubuntu works, the fuel gauge and CPU bucks are fine also.

Is the eMMC tied to the SoC? If not can I use another eMMC to test on this switch? 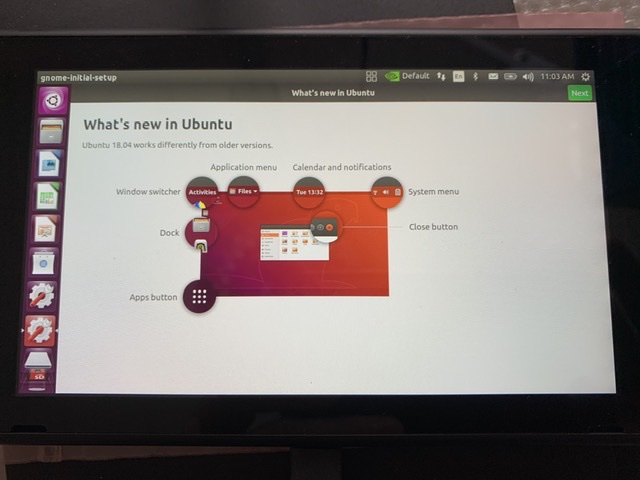 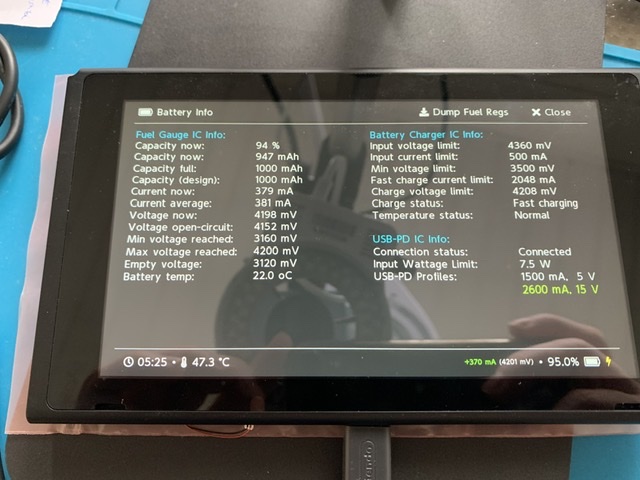 And to add, I do get 3v3 and 1v8 at the eMMC female connector

I think there is 2 question: Was it hardware damaged that lead to the switch going into rcm mode or the owner misleading you and said it was only used in stock fw ? (within hekate can you turn off autorcm ?)

Would you be able to run atmosphere and see what error it shows? atmosphere on sysnand (emmc)

I’d guess that since Ubuntu works, the fuel gauge and CPU bucks are fine also.

I’ve never done this on a switch directly, but can you try dumping the EMMC from terminal? I have no idea if you can do this from wthin L4T Ubuntu but it would save a process for the next few steps and it would also be nice to know if this works for future reference

Failing that, what does Biskydump display, can it successfully retrieve keys, smiley face?

I think the next best thing to do here is try and get and backup your Boot0, Boot1, prodinfo and prodinfof partitions and transfer them to another module so we can rule that out.

Is the eMMC tied to the SoC?

You can read the data off an EMMC that is not paired with the SoC using Hekate etc but you have to watch out for the FW version, if you were to stick this suspected bad EMMC module on another switch board and lets say it was on FW V9.XX but the boards original EMMC etc was on FW V8.XX then you’ll burn the fuse, at which point you’d effectively brick it until you update the FW up to or past that point, this isn’t a huge deal on unpatched boards as you can use Hekate etc but this would be a real problem if the one of the boards was patched… hope that makes sense.

within hekate can you turn off autorcm

I can turn it off but it will turn back on automatically and I don’t need to use jig to enter RCM mode.

I tried all those launch configs and I get “failed to init emmc”. Should I try emuNAND?

I’m not familiar with this tool and I couldn’t find any useful information about it. Is it some kind of payload? Can you send it to me via PM?

next best thing to do here is try and get and backup your Boot0, Boot1, prodinfo and prodinfof

I tried the backup tools in Hekate but pretty much all those give the same error “failed to init emmc”. If I run fusee-primary payload I get error “[NXBOOT] Failed to mount emmc”

I’ve never done this on a switch directly, but can you try dumping the EMMC from terminal?

I’m not familiar with this tool and I couldn’t find any useful information about it. Is it some kind of payload? Can you send it to me via PM?

You can find it here https://switchtools.sshnuke.net/
sorry my typo probably prevented you from finding it, though I’m expecting this to fail with an error given your previous tests as i think you have something physically wrong with the EMMC module. Can you take a photo of it front and back so i can inspect the PCB. It’s not uncommon for them to fail though it’s typically as a result of liquid damage, but i think you mentioned this board wasn’t liquid damaged.

It will involve the DD command, but whether you have access to nand I’m not sure. It’s possible you could use a GUI based tool, i think gparted lets you make backups… sorry been so long since I’ve used a Linux system i forget.

Hmm EMMC looks fine and everything looks stock and nothing is really jumpring out at me, can you flip the EMMC module over also, it’s likely not going to reveal anything but can’t hurt.

The 0 ohm resistors around the Realtek IC look very discoloured, for whatever reason the Realtek IC is always covered in flux on stock boards, this might be that… but they look darker than normal which might indiicate excess heat in this area, might be worth checking - though i don’t think this relates to your EMMC issue in any way.

Let me know the results of Biskeydump or DD in ubuntu.

The 0 ohm resistors around the Realtek IC look very discoloured

I’ll clean the resistors around the ALC IC and measure the resistance the next time I’ll remove motherboard.

I have done similar thing with N3DS. I soldered SD card reader to the eMMC NAND chip, backupped the data and restored modified data. Not sure if I can do the same here or if it’s any helpful.

I can try reflowing the NAND chip but I want to leave it as a last resort. 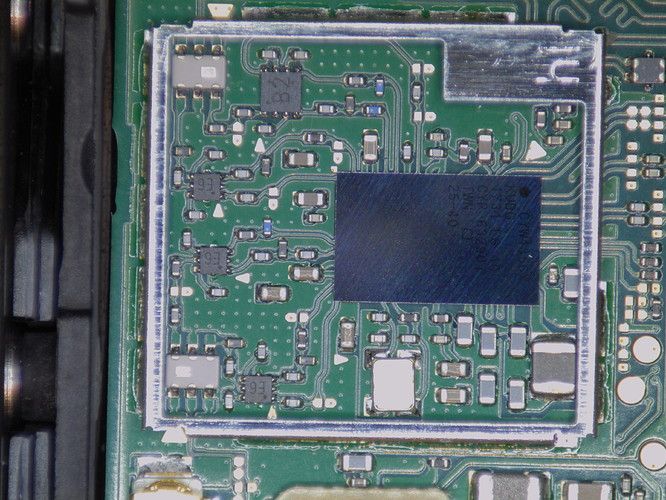 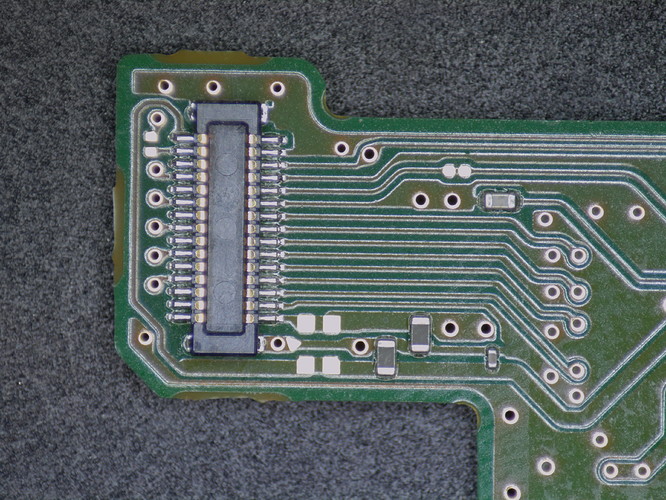 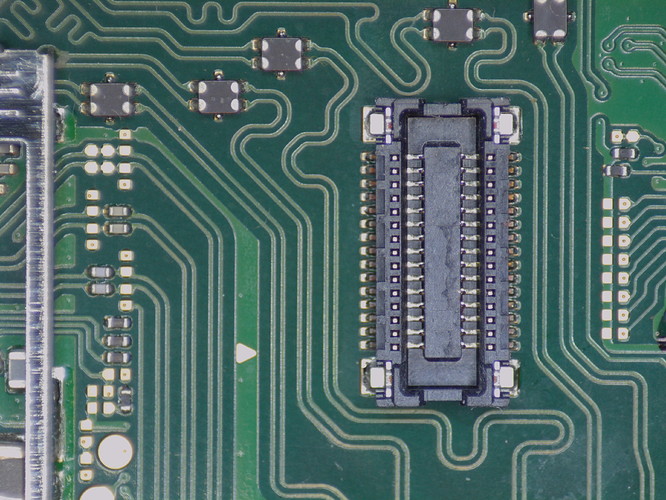 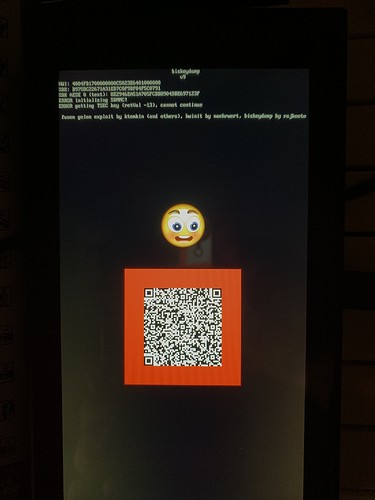 EMMC looks pristine as you say. but it does appear to be your issue.

If dumping via L4T Ubuntu doesn’t work i think you’ll have to move on to the other methods.

I have done similar thing with N3DS. I soldered SD card reader to the eMMC NAND chip, backupped the data and restored modified data. Not sure if I can do the same here or if it’s any helpful.

I don’t recall what the IO voltage is on the EMMC, might be worth checking the datasheet and making sure it’s tolerant to whatever voltage your SD adapter is, last thinig you want to do is unintentionally fry the IC.

I use a low voltage EMMC adapter, though i have got a more dedicated board coming soon which is more plug and play, I’ll digg ip the link for you

I wouldn’t bother refflowing the IC, very rarely the issue, plus we want to save the heat cool cyles for later in an effort to temporary resolve an internal fault. Hitting it with over 300C will redce the chances of that being successful

Okay, so I guess my options are

I don’t have any excess eMMC modules. Are these easily available?

its just a standard bga169 emmc module. you can find those on any mobile phone board and solder to the original emmc riser board

I tried to access the memory module’s partitions using single bit mode with a little bit of heat and also reflowing, but no success. I guess I have to pronounce this switch dead.

I have had now two Switches with presumably dead eMMCs in this week.

One switch runs Ubuntu fine but Hekate or other payloads cannot access the eMMC and can’t backup the eMMC even with external reader.

One switch (maybe patched) accepts payloads via TegraRCM but nothing on the screen (tested with another screen). How do I know if the switch is patched? Based on the serial number it is but no error when I inject the payload. I tried this eMMC on another one, but I get the same old “init eMMC failed”. Also the external reader does not recognise the eMMC. This switch has had impact damage because I replaced the screen few months ago so maybe the eMMC is recoverable with reflowing.

How about you guys. Have you had many of these dead eMMC cases and were you able to recover any?

Just a quick update for this thread. I have dozen of Switches with dead eMMC’s. The latest version of lockpick can retrieve prod keys even without a working eMMC. This can be used to (partially) restore the switch back to life. However, the switch acts like a banned console, so you cannot access the Nintendo’s server (no FW update, game updates, online playing etc.). Using a CFW does expand it’s capabilities though…

Here is great video how to revive a Switch without eMMC/NAND backup. And another Nintendo Switch with dead eMMC (failed to init eMMC). Based on the thermal camera this eMMC is shorted and not likely to be able to recover. The eMMC is plugged to another switch with Hekate running. Normally the eMMC won’t heat up but in this case there is a slight temperature increase.
This Switch is a no fix… 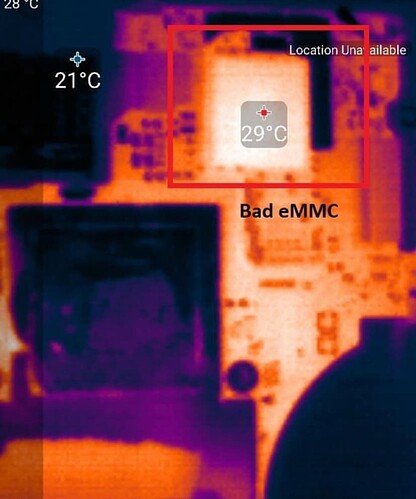 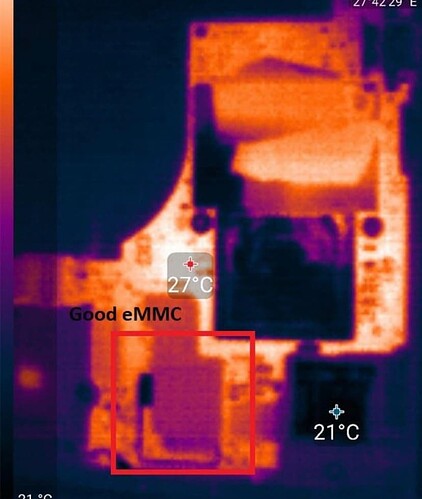 check the caps on the emmc board if any short. Heating up/short emmc has higher chance to rescue than “Failed to init” EMMC.