I have a 2DS that I am working on that has a problem reading SD cards. I knows that card is in the slot (which, means the detect pin is working anyway) but it says it can’t read the card.

Here is what I have done so far:
-Tried SD card in another 2DS and on PC, works great.
-Tried piggybacking another SD card slot (just so I didn’t have to take the other one off), same issue.
-Compared voltage drop readings from a working 2DS to the faulty one. All reads are very close except one, the 7th pin from the left, with the pins closest to you, which I believe is the clock pin (from a pinout of an SD card slot I looked at). Working unit had a voltage drop of .458 while the faulty one has a voltage drop of .768 (red probe on ground for both tests using the same ground pad).

Looking at the board, TP103, just next to the SD card slot connects to pin 7 of the slot. It also connects to the bottom left most pin in (the first pin in the row of three) of component DA3, which has D60 engraved in the case of the component. Its a 5-lead component (2 on the top, 3 on the bottom). One post I saw on another forum suggested it “appear to be TVS diodes in SOT-5 packages” though they were not able to confirm that.

I pulled DA3 from both my working board and then from the faulty board to measure the voltage drop on all of the pads DA3 was connected to. My working board measured the same voltage drop readings as before. The faulty board, however, had the bottom left pin of DA3 (the suspected clock pin) read OL. I assume I will need to look for the next component in the line after DA3 but I am at a bit of a loss as to what that is. I am going to try to beep this board out some to figure out what is next in line but if it goes to a BGA next, I probably won’t be able to find it.

Anyone happen to have an idea on this one?

After probing what feels like every via and ever test point on the board, I can’t seem to find what is next in line that connects to that bottom left pin of DA3. I even pulled the shield off that covers the CPU and RAM and did some probing around there as well but didn’t have any luck.

Unless someone knows the answer to the “what’s this connected to?” question, maybe someone can at least ease my mind that I am at least looking in the right direction with what I’ve done so far? The fact that my working console has a voltage drop reading on that bottom left pad of DA3 means that pad is hooked up to some other component on the board and not just pin 7 of the SD card slot (and that TP103 test pad), correct? Using that same thought line, that means that since the bottom left pin of DA3 on the faulty board is reading OL (but wasn’t with the DA3 component on the board),but that pad has continuity with the test point (TP103) and the SD card slot pin 7 still, means that there is either a broken trace somewhere on the line after that pad or a different faulty component on that same line, correct?

Here are a couple of pictures of the board. The component that is missing on the front picture is DA3 (marked D60) which looks identical to the component DA4 just above it. 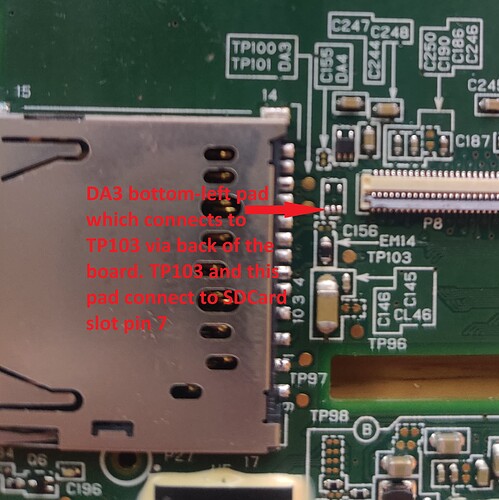 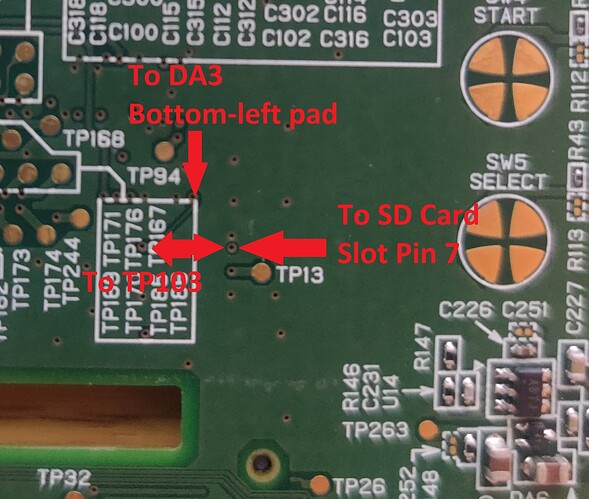 Ok, I don’t have a solution for this problem, and never will as I have to return the unit. Here is what little extra info I’ve gathered in case this helps anyone later:

The 2DS and 3DS use ARM11 and ARM9 processors. The ARM9 processor is (at least in part if not in whole) responsible for SDIO from the WiFi module. It would stand to reason that it too is responsible for the SD Card SDIO data as well, though I’m sure the ARM11 is more than capable of handling it. A very old release of data for the 3DS, which is very similar in design to the 2DS, had a separate IC dedicated to handling the SD Cards slot IO. I believe this was later all integrated into the ARM processors as I haven’t found any mention from folks who were doing somewhat of a parts inventory of the 3DS of a separate IC for handling SDIO.

What I believe happened to this unit is it was dropped and suffered some damage to either a trace leading from the bottom left pin of DA3 to the ARM9 (just a guess since there are not schematics showing the two are linked), or the ARM9 itself got damaged in the fall, but not to a degree that would prevent it from working entirely (perhaps just a single solder ball became disconnected. My assumption that the unit was dropped is based on some chipped coils I found near the PMIC, which would be unlikely to happen any other way (plus I know this thing was used by a young kid for quite a while). Short of me pulling the ARM9 on my working unit and trying to see if one of those pads is connected to DA3, I don’t think there is anything else I can do here. I don’t really want to risk damaging my working unit and don’t have the re-balling stencils nor solder balls to re-ball the ARM9 if I did pull it.

Hope that information helps someone. It was collected from a few disparate sources and assembled in my head. One such source was folks talking about hacking the 3DS and how you could use the WiFi and its SDIO to push things to the ARM9. Other sources were the original 3DS hardware specs and some more recent hardware inventories of the ICs on the 3DS and how they seem to not have a dedicated SDIO IC anymore.

Sorry, I dont have any info to give here, but it was an interesting read. I have a 2DS XL with bad wifi even after a chip swap, so maybe a similar issue with the arm9 chip then? There is so little information compared to other consoles on the hardware end.

Unfortunately I don’t really have anything else I can offer on this one. The ARM9 is the next major IC in line after the WiFi module. Assuming of course you’ve checked the antenna for issues, that would be my guess.