I bought a faulty switch that had a cracked screen and also didn’t turn on.

Opened it up to check for short and to transplant it into a housing that had a good LCD etc.

All the caps around the BQ and some around the M9 chip had shorted, checking with a voltmeter it wasn’t drawing any current so I removed the BQ chip and all the shorts went away, so I installed a new BQ chip.

It started charging at 0.52a and the battery icon appeared on the screen so I thought I had fixed it left it to charge a bit but then the icon disappeared but it was still drawing a current. I turned it on and the Nintendo logo showed on the screen but then nothing and it stopped drawing a charge, checking the BQ chip it had shorted again.

So took a known working chip and installed it, there was again signs of life and was getting the voltages I was expecting around the two ICs. The charge icon showed again and the battery was fully charged it would start charging at 2.2a.

Turned it on and again the charge icon appeared and the Nintendo logo but then again it turned off but no shorts around the BQ chip this time and it still draws current.

I think it is turning on but the Backlight and LCD are not turning on as when I leave it for a few minutes the CPU does get warm and when placing it in the dock it does detect it but no signal to the screen.

So I checked for shorted caps around the Backlight and LCD connector and the ones circled in the picture are all shorting.

Has anyone experienced an issue like this before because I haven’t and I’m struggling to find the cause. 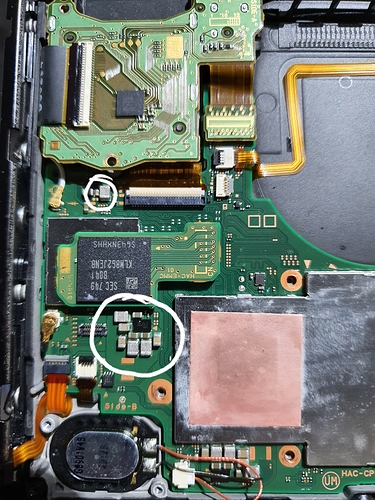 Does it make sounds when a joycon is connected and some buttons are pressed?

I would remove the caps around that chip and check them for shorts, after that the ic which could be broken