I have a motherboard here that is reading a 12 Ohm short on the 1V8PDR, and has shorts under the CPU (pretty much every cap. The same 12 Ohms can be measured on the small cap below the M92 chip. It is a HAC-CPU-20 board.

Any ideas what I should look at first? I am tempted to remove the M92 and see if the short goes first, hoping someone else may have more concrete info on this sort of short.

Yeah removing the M92 IC would be a good first step and seeing if the short clears.

If not then it’s main PMIC if not, then Ram, if not then most likely it’s the SoC… though there is more ICs/components on this rail in cases such as this it’s typically one of those ICs which fail.

What was the original cause? liquid or impact?

I would also verify your other rails resistance to ground, I’ve had cases where the short on 1V8PDR was secondary and it was a short on the SYS rail putting a subsequent short to ground on 1V8PDR - because of a failed PMIC for example.

I don’t know for sure the original cause, as I got this board in a box of parts. But the USB port was mangled inside so I would presume that the issue was a short on the USB that has blown something.

Which chip is the main PMIC? Is that the one just below the SOC? I will get some readings from the other rails, which is the SYS rail?

These are the readings I get, on what I assume are the different power rails, though I don’t know enough to be sure that’s what they are.

From what I can tell, the purple reading is normal. The blue lines should be higher (though are still low resistance). And the red one is even worse than the green one, so is probably the primary cause of the short? 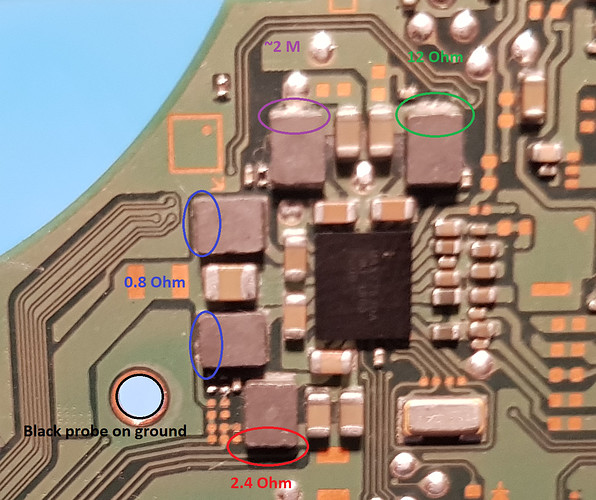 Your SYS rail can be found at the large “2R2” inductor near the BQ IC, just measure either pad to ground.

Provided it’s not a short on the SYS rail and as you have a dead short on a CPU (0) rail, so it’s either the PMIC at fault or the SoC.

But, even still, I’d remove the M92 IC and P13 ICs as a matter of course as they both have hookups and responsibilities to USB etc and as you observed a USB fault thats first port of call, though I don’t think either are your issue and think it’s more likely to be SoC based on your measurments.

I take it you’ve already removed the mangled USB port though, right?

Ok, resistance to ground on the 2R2 inductor is all over the place somewhere between 800k and 4M, but certainly not shorted.

Where is the PMIC? I would imagine that is easier to remove / replace than the SOC.

Edit: Oh, and yes, the mangled port was removed. And the shorts existed with no port on at all, I have since put a new one on so I could test voltages.

There is no change to the short after removing the P13 and M92 chips.

Ok, resistance to ground on the 2R2 inductor is all over the place somewhere between 800k and 4M, but certainly not shorted.

Where is the PMIC? I would imagine that is easier to remove / replace than the SOC.

In your previous image, it’s responsible for producing all primary/critical rails which can be seen on the surrounding inductors.

Yeah, the PMIC is an easier job than the SoC though it has quite a high ball count and will require stencils and solder paste to put back on if not the culprit, though, if the PMIC is not the issue then the SoC is almost guaranteed to be the cause of the shorts…

Edit: Oh, and yes, the mangled port was removed. And the shorts existed with no port on at all, I have since put a new one on so I could test voltages.

No power should be applied to the board while these shorts exist.

Ah, ok, well I guess I will remove that next then. I have stencils and solder balls, I am just lacking experience on the re-balling side. Still, with a board this shorted I don’t have a huge amount to lose learning on it.

Yeah, and you have a 50/50 shot that if it is the SoC at fault that it’s caused by junk under it or joint/pad issues as such it’s best to preheat the underside of the board at 150C then at 200C for a few minutes each before attempting to remove the SoC… if that’s not the issue then it’s internal damage on the SoC

The SoC is not tolerant to excess heat and applying too much for too long will kill it, top indicator is the resin/epoxy around the center die turning brown, if it turns that colour it’s pretty much game over. You want it to maintain that greyish/blueish tinge

So, I removed the SoC today, and there was a good amount of crud under there. The short does appear to have gone now too with it removed. I have cleaned it, but haven’t removed the old solder yet. I guess the next step is to try and get some new balls on it… should be fun. 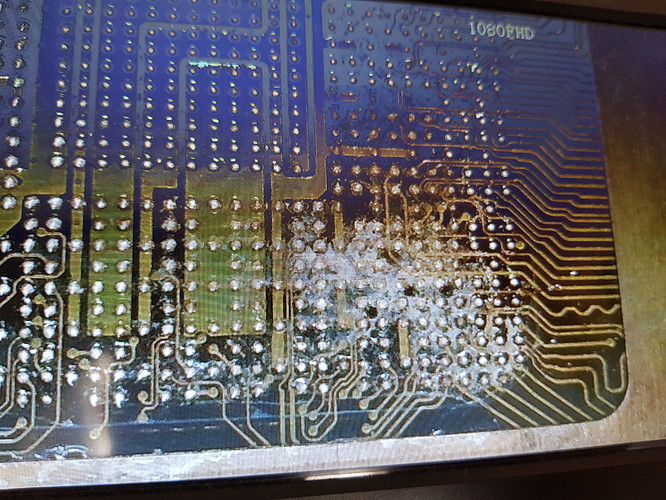 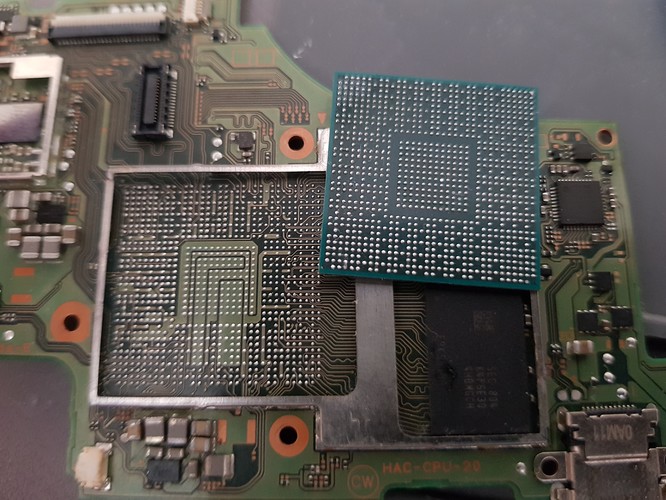 Well done, So what I’d do next is measure the resistance of the corresponding cap on top of the SoC which is on the 1V8PDR, from memory it’s the lower row, farthest to the right, though you should verify this on a known good/donor by buzzing it out to this rail.

From memory you should measure approx 350/400k (i think) with the SoC out of circuit on this cap.

If you measure the same near dead short across it, then the SoC is toast. Now this is not a fulproof way, as there are other lines on the SoC which are interconnected when on the board, but this gives you an indication of whether it’s worth continuing with a reball or not.

Also, just to clarify, the other rails which you have as blue and red in your image cleared also on the board?

These also have caps on the SoC also, which you could check resitance on with the SoC out of circuit to verify

Well, the 1V8 cap is showing about 350k, but 80% of all the others are showing very low resistances, like 0.8r… which doesn’t sound good.
I may reball it anyway, just for the practice.

but 80% of all the others are showing very low resistances, like 0.8r… which doesn’t sound good.

Yeah, probably caps which corespond with the CPU rails, only one cap which normally tests as a short which is normal.

Yeah, its a shame, but its good to know for sure, I guess I have myself a parts board. Thanks again for all the help, I have learnt a lot.