Bsod if the switch is bent

what could be broken ?

Looking at the bend the worst looks slap bang in the middle, which probably means the SoC pads are tore and possibly the main PMIC, it’s unlikely you’ll be able to fix this, reserve the board as a donor.

it would work if I take the chips of another defective mainboard ? 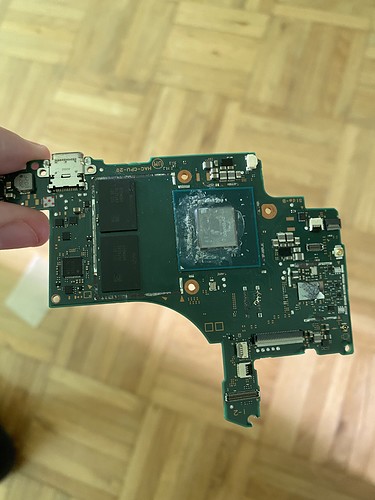 You’d have to move the SoC (and possibly Ram) from the bent board over to a (good, flat) donor board.

Keep the EMMC module together with the SoC (theyr’e paired)

When removing the SoC, first preheat the opposing underside of the board at about 150C for a few minutes so as not to expose the SoC to unnecessary excess heat. After removal tin the pads with leaded and wick the IC off, the proceed with reballing etc

btw if that image above of the board is from the bent switch frame, and if it’s missing the EMMC module, it’s unrepairable, use it as a donor.

and the other thing is I only have the two mainboards available, both of which are partly bent

tbh I think they’re too far gone… i’d just keep these bent boards and use them (and the components on them) as donors.

Keep the EMMC Module that originally came with each board together and matched up, don’t mix them up and don’t mix and match them.

When you eventually get another donor board, you can then transfer the SoC (and paired EMMC module) to it.

what exactly is soc can you tell me ?

The board isn’t bent t

The board is bent, thats the whole reason for the blue screen in this particular case, causing joint or via damage at either the Ram, PMIC, SoC, a reball of the SoC does not guarantee a fix as the pads and vias could be pulled, the die could be cracked at the SoC… given the severity of the bend I personally wouldn’t trust any repair, at least not on this board or in this assembly. The assembly can be bent back into shape but you never truly get it straight which will/could lead to joint fatigue and/or damage in future as well as potential LCD issues.

Each to their own, but just my preference