Capacitor on CPU, no power

I have a system that is a blown sx lite install. Im not sure if anything fried but they removed everything before I got it. The caps on the cpu bottom row are shorted. I removed the two caps that the instructions say are installed on sx lite but the shorts are still there. Any ideas?

Mine had the same fate. Kinda.
It still powers on, goes to sleep, wakes up (which it wasn’t doing while the modchip was installed).
I’ve asked pretty much everywhere, but I haven’t come to a definitive conclusion just yet.
In case you’re thinking about replacing those caps for new ones, your choices for the Switch LITE are:
#1 ‎C0603X5R1A104K030BC‎
TDK Corporation
CAP CER 0.1UF 10V X5R 0201

As you can see, different voltages, which is a thing.
Assuming all other caps work with 6.3V, if you solder a 10V one on the APU, you will end up with a capacitor that stores more energy than others. However, capacitors are also used for building voltage potential so… yeah, it could be risky going with one that accepts more voltage.
But the capacitance is different .1uF vs 1uF, which is what I’m still trying to figure out. Still not sure which is ideal for the Switch LITE.

But I guess you were lucky, since I ended up with another lost capacitor, which resides next to the internal memory chip: 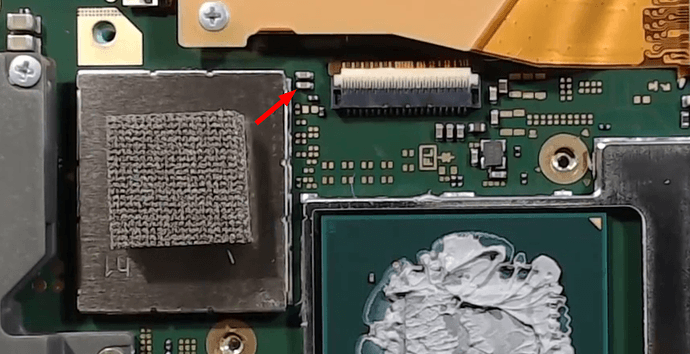 those 2 caps are related to the display. I know this as I got a switch lite today that had a faded screen with horrible horizontal lines on it.
When I stripped the MB out I found that someone had tried a previous repair and had solder bridged thoses 2 caps. I removed the bridge and now the lite is working perfectly.

@mightyjebus could you please let me know the capacitance of that capacitor, more specifically the one I pointed out in the picture? Is it .1uF or 1uF?
In your case, I guess you removed the bridge with a soldering iron because using a heat gun that close to a plastic connector could damage it, right? Mine doesn’t have the other capacitor (again, the one I pointed at in the picture I provided) and my Switch Lite works fine but I’m afraid the symptoms for not having the other capacitor present could show up down the line. Would you go for placing another capacitor (that could be 0603 or 0805 AFAIK) or just leave it as is?

I’ll get you the values today.

I did a quick check with the cap still on the board and I get the following:

Thanks for providing that. Unfortunately I only got 1uF caps on me, so I’m not sure whether I should go with it and replace the bottom cap or just leave its spot unpopulated.

On a side note, one of the caps that sits on the Tegra APU (the one from the bottom left corner) was also ripped off after removing the modchip. After asking away on some forums, I learned it’s a 0201 1uF 6.3V X5R MLCC. I got some, soldered it onto the APU, and went for some continuity test. Most of the caps at the bottom beep from both sides but the ones on the right side and the top behave “normally” (meaning they only beep from one side). I guess I’m going to remove this cap again and do another continuity test to see if it behaves like that. Please watch the 4-min long Video: youtube[dot]com[slash]watch?v=30abLbMxmXE - does yours behave like that?