Hi, my Switch had the following defect:

So i replaced the USB Port and the M92. After this every thing was working. It charged with my phone charger with 5V and 2A (cant remember the exact ampere).
Than after some days I wanted to charge the switch again with my phone charger but it only showed 0A. I opened it and found out, that the cap above the usb port at the back was shorted.
I swaped it with a new from a donator Board and after this the switch Was charged at 5V at 0.46A but no quick charge (2A). I also got an error message “unable to charge” and a X next to the battery. After this I tried to charge it with my original Nintendo charger and it charges with 15V at 0,7A. I meassured the Port in Diode Mode and found out that the two center pins (D+ and D-) show OL.
So i guess there must be something wrong with the communication lines.
Beside this the switch is working fine. But it bothers me that I cant charge it with my phone charger.
Has anyone an idea?

You posted a pictures of a normal switch. I have a switch lite 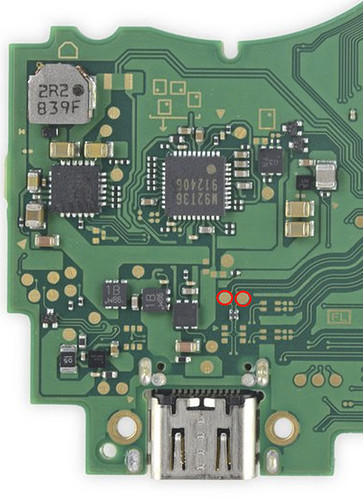 Oh, well. that 2 red test points go directly to TEGRA CPU. SO you have open line to CPU. May need a reball or bad APU.
I assume you check diode value by red prob to ground, black prob to the test point?

Okay, good to know. Thank you very much!

no big deal for switch lite IMO. since everything should still work as long as you stick with PD charger

Yes thats true. Although i am wondering how this could happen :/.

I see most case on a Normal switch is when d+/d- pins inside charging port bent towards Vbus power line and ppl don’t notice and get charger connected sending high voltage to data line, eventually data line gone.