Hello everyone! sorry for bothering you but, i buy a Switch Lite (HS) and i need to repair her but some components are missing… can you help me for the values and names of the components please?

From what I can see in the picture nothing is missing when compared to one I have on the bench at the moment.
The black 4 leaded device is marked L18 KC. The larger capacitors measured in circuit appear to be 1uF. I wasnt able to get a value reading from the smaller capacitors. Hope this helps you. Karl

Oh thanks you! But what is the the 4 loaded component? a MOSFET?
Sorry i forgot to mention the picture IS not my motherboard it’s an picture find on internet!

Thanks you for your help! I’ll try to fix it and i Come back for the result!

I did a quick google search using the limited information we have but nothing reliable returned. It could be a MOSFET but more likely a dual diode pack but purely quessing. If I get time at the bench tonight I will meter it and try and work out how it fits into the circuit around it. A donor board may be your way forward on this one. Karl.

Thanks you for your help

I join a picture to my motherboard it’s really fun

Just had a look at the images and best guess would be a switch of some kind, maybe a mosfet, or possibly a regulator.
What works or not with the switch? Given the position of the device I would assume it to be power supply related for the touchscreen.
The missing capacitors are the 1uF previously mentioned. Karl

Oh sorry i forgot to say, my Nintendo Switch don’t power on with the Burton but when i plug the power supply my backlight work but nothing else, no Nintendo logo, no sound… Only the backlight

And thanks for all your Time for helping me

ok so the FT9cj chip just to the east of your missing components is responsible for handling touch screen input for your switch and is directly hooked into the zif connector for the LCD. 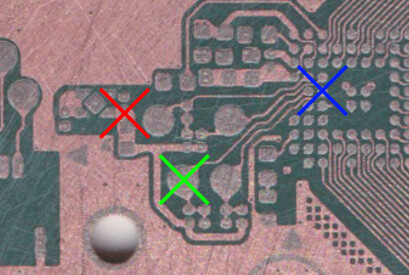 you can see a path from that blown chip all the way in the image above (and follow a second to the other test pad to IC if you look). Its possible not having these components in place will prevent the screen from switching on, obviously your touch screen will most likely not function either.

I know you say there is no sound, but if you’re getting a backlight to come on I would imagine your board is actually booting just fine. Do you have an ammeter, if so, does it show the normal signs of booting (going up to 15v .47a, then down to 0a and back up again). If you give it enough time to boot, do any of the other buttons do anything? Pressing one three times should unlock the device and also produce some audio, does this happen?

Oh waow thanks you, but i let my Switch “start” like 1,30 minut but nothing (before click 3 Times i try to up the volume at maximum ) just a black screen with backlight

yeah, that’s unfortunate, without an ammeter measurement its kinda hard to tell if its really booting or not. I don’t believe the backlight circuit activates though unless the switch is able to boot, but i am not 100% certain on that. It is quite possible what is happening is the switch is booting to an error screen and not making it to HOS.

I got a ammeter i will try at the start of the week, thanks for your help

Ok! I’ll try with an ammeter !
Nothing! (I put my négative on the métal shell) and try all of the test point and nothing! No value!
And only 0,3v at the capacitors… Something wrong with a electrical component i think… Have an Idea?

i was referring more to a device similar to something like this. It sits between the charger and your device.