I have this very old GTX 1050, which won’t turn on. Upon further inspection I found the following issues, as mentioned in this picture. 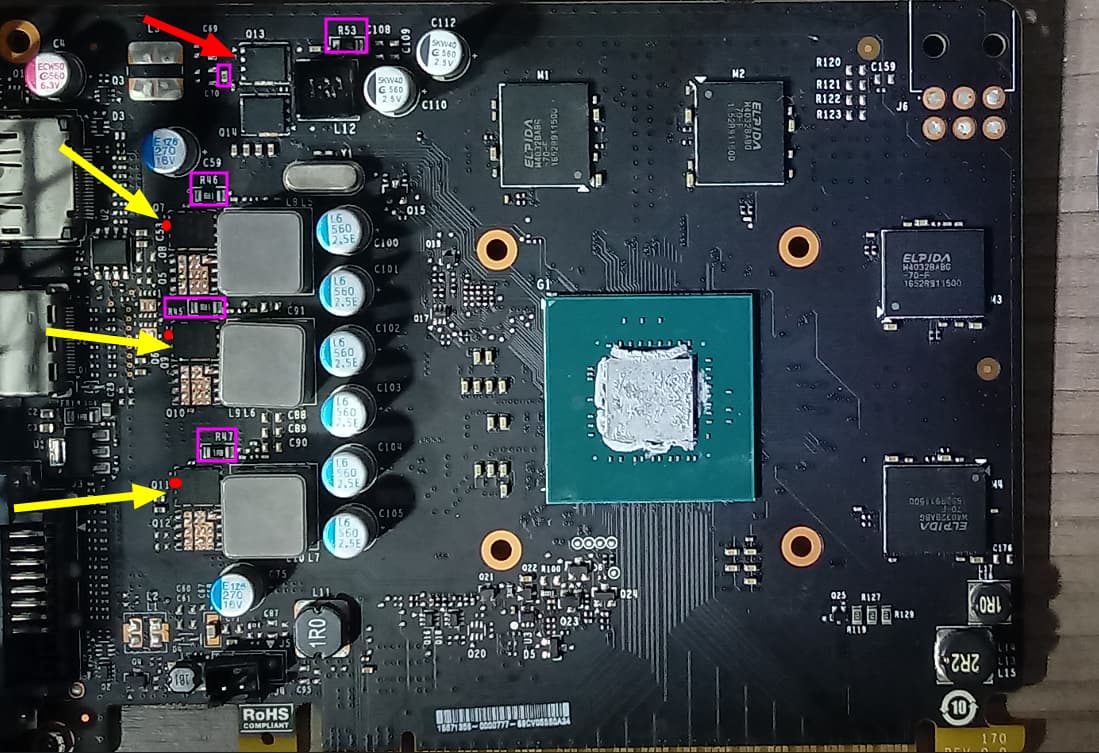 I suspect Q13 could be my issue because source pins are pretty much dead, unlike Q14 under it. Also, next to Q13 there is this cap (C70), which is shorted. And down the board, other Mosfet chips are shorted on drain pins and the second source pin (painted in red) is also shorted. Not to mention some resistors (highlighted in pink) are also shorted.

Could anyone help me out? I’m willing to remove Q13 from the board, but I really need some advice from somebody who’s a pro on gpu card repair.

Also, what is the exact make a model of this gpu?

Hi, and thanks for answering!
Well, as you can see, there is no 12V connector for this card, so it only takes power from the PCI-E (I did measure the first three fingers from the left though and they output a positive resistance number, which climbs up to 5K Ohms). As for 3.3V, it’s good (4.433 Ohms) measuring the 4th pin from the right of the connector (including missing fingers), but that’s not the end of the story. I also measured my inductors (the three biggest ones between mosfets and capacitors) and they’re all low resistance. Each one outputs 1.7 Ohm when checked to ground BUT if I measure for resistance between the 3.3V to each inductor, I get 4K Ohms. So I’m not sure whether it means my mosfets are bad or if I should keep looking for the source of the short.

Ok good info. i have a lot more experience with gpus than I do consoles so maybe i can help.

The 3 mosfets and 3 large inductors you mention are for the vcore 12 volt rail to the gpu chip.
The mosfets and smaller inductor at the top should be your memory power vmem.
It would be smart to locate the other voltage rails & regs like 1.8 volt and 5 volt and such but my guess is that just the 12 volts is shorted based on your numbers. 5 volt can be checked on that big 3 leg regulator behind the vcore mosfets near the ports.
Can you post a pic of the back lf the board as well?

Also post the markings or pic for those vcore mosfets and the 8 pin ic behind the top vcore mosfet.
I can tell u a lot more with those. Just don’t plug the card in to the pc again as it could send 12v to the chip if ur power supply has slow short protection.