Wasn’t sure where to put this. But here we go, i need some help on improving so … well basic stuff for some.

I’ve been playing with a Xbox one s, removing stuff and trying to put it back on, i’ve done a few small caps and resistors with the hot air gun. Just heating picking them up and then putting them back on.

So i moved onto something else. A mosfet on the power rail, but having issues. I’ve got it out but can’t get the pads cleaned up and re-tinned, not sure if its the tips or wik etc.

This is what i’ve got. 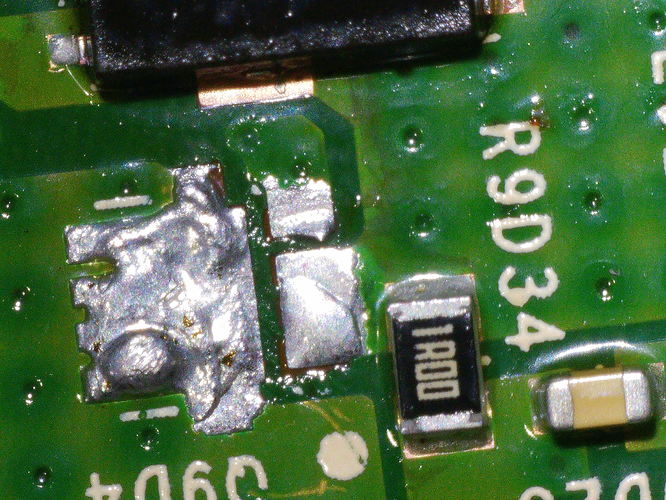 Any tips on what size of tip i should be using & temps. Also any recommendations on what wik to buy (UK). I’m not sure if some of my issues are coming from my Ksger T12, so hoping to see if someone has some tips before i scrap it and just buy a Hakko 888D (Can’t afford a 951

So I would use a D24 for this which wouldn’t have any problems here, you could also get one of the BC style tips which would also work fine. 420C or greater on a calibrated tips is good

I’m not sure if some of my issues are coming from my Ksger T12, so hoping to see if someone has some tips before i scrap it and just buy a Hakko 888D (Can’t afford a 951

Your issues are stemming from a buggy FW as far as I can tell as others have reported your exact issues on a certain FW version, there was also talk of the ball switch in the handle was leading to issues on some FW version, I never liked that thing and cut the wire and removed that switch… otherwise you have to hold the handle like a vulture in order for it not to trigger standby.

Have you tried installing the CFW yet? I would guess this will clear up your problem

I think you will be very dissapointed with the Hakko as the performance can only be worse… it doesn’t even have the ability to calibrate between different tips afaik.

Also, solder type, use 63/37 from a legit brand, the stuff coming from china is more often than not 63/37 as they claim on the label, I use chip quik

Again thanks for the tips and quick response

I did flash one of my Ksger but didn’t have it to hand for this try. But will next weekend, after I’ve got some better solder and wik.

I’ve got a few different tips and will try the D24. I was using the D12 but didn’t try any of my BC.

Will have a hunt for some good solder and wik

Again thanks for the tips and quick response

I did flash one of my Ksger but didn’t have it to hand for this try. But will next weekend, after I’ve got some better solder and wik.

Cool, you’ll have to let me know how you like the CFW, I haven’t flashed mine yet, just waiting on the MCU to arrive so I can keep the factory FW safe in case I don’t get on with the CFW.

Will have a hunt for some good solder and wik

I think mouser has a large roll of the chip quik 63/37 for about 12 quid from memory, you can prob get some decent wick there too.

I’ve found the larger width goot wick knockoffs are ok from ebay, but the thinner ones start fraying straight away which is a pita, a better brand wouldn’t do this.

Cool, you’ll have to let me know how you like the CFW, I haven’t flashed mine yet, just waiting on the MCU to arrive so I can keep the factory FW safe in case I don’t get on with the CFW.

Yeah will do, did switch it on after and the menu is a lot smaller

Tips - you just add the ones yourself.
(that’s all I can remember from memory)

What width do you use? Do you use different sizes or just “one fits all”

Tips - you just add the ones yourself.

I like that idea, as there are a few in the list on factory FW but I imagine it’s missing a few.

What width do you use? Do you use different sizes or just “one fits all”

Just a bit of an update on this,

I received the MCU so I could keep my original FW safe.

No offense intended at the CFW dev (and others involved) as I’m sure he’s put a lot of time and effort into it’s development and the issues more than likely surround all the different board variants used in these Ksger/Quicko etc stations,

but to put it bluntly, on my black PCB (has 3.1 printed on it) this CFW is broken,

you assign a name to the tip, but after the tip calibration doesn’t work at all, you dial everything in either by adjusting the ADC values or using the auto menu, everything reads fine with the knockoff ext hakko TC to begin with, then afterwards the tip is still out by 100C across ranges.

Encountered numerous bugs such as it randomly claiming the tip is >600C but the tip in actuality is <300C and then another unrelated bug where it just randomly decided to allow my tip to glow bright red, the display in this case reported >800c, though I don’t know if this was accurate.

I have an assortment of T12 tips real and fake and they all displayed these strange symptoms, so unfortunately I cannot use this CFW unfortunately, as these are all issues which I didn’t experience on my original Ksger FW version

I will at some point attempt to pull the original “known good” FW off the original MCU with openOCD, though the whole stitching process after seems like the more difficult part so we’ll see.

@hobbit666
did you encounter similar issues or is this isolated to my board rev?

I’ve not had time to test, been waiting for an adaptor for my scope and new solder and wik before I get all my kit back out (use my work desk and solder desk so pain to keep swapping if not going to use it for long lol)

Will try and do this on the weekend.

Yeah I’m still having some issues, tried doing a pi3usb on a switch and got it off with hot air fine, but struggled getting the folder off with wik. Then trying to tin the pins and especially the ground plane found my tips sticking.

Had some advice from other places saying the cheap irons don’t have good thermal recovery so they have issues holding the temps, so try warming the board up with a hot air station first, then with flux should clean up betting and tin.

tried doing a pi3usb on a switch and got it off with hot air fine, but struggled getting the folder off with wik.

After calibration, how accurate are your tip temps shown on the OLED compared to you ext thermocouple?

With the CFW I noticed a difference anywhere from 50C all the way up to 100C variartion (typically lower that what was shown on the display) across ranges following “calibration” and had to fight it as it has an annoying min/max of ADC values which prevent values which are too low/high… These are issues which I did not have with my original ksger FW (I think it was software vers 2.09 on the display)

I did try the other 3.1 FW which is floating about online, and could get the tips to within approx 15C of the actual measured temp across ranges but still not as good as my original FW and I once again had to fight it in the calibration menu as it has the same issues as the CFW.

tbh I’ve tried both genuine hakko T12 and the clone T12 tips and there’s very little appreciable difference between the two, maybe the genuine tips perform 10% better but I think the cost difference wipes that out. Though saying that, I can see these clone tips are being manufactured by various different companies, so it’s possible some are worse than others.

I’ll see if I can dump the FW on my unit with openOCD, problem is I need a comparable FW version which is similar enough to stitch in the missing data, all the versions I have downloaded seem to be on very different software versions but if I manage to get one which works following this stitching process I’ll send you through this FW so you can atleast rule out the FW as the issue

Perhaps look at the JBC clones, though… the FW on these stations looks just as jumpy as these newer KSGER FW versions and the CFW (in fact I’m pretty sure they have just modified the CFW)

Was still seeing 100°c ish differance in display to measured. Which I don’t think is helping me.

Firmware I wondering if its worth trying to get 2.x and see how that does.

did see a used hakko 951 on ebay few weeks ago, should of bought it

Will play next week with maybe using the hot air gun to warm the area up first and see if I can get the pads to tin.