Last night I continued working on a Switch that worked fine apart from it didn’t display anything from the dock. I replaced the P13USB chip and I was excited to see that the dock problem was now fixed!

I re-assembled the Switch, but now I do not have a display on the LCD!! The connector appears to be ok (I can’t see any bent pins).

Does the P13USB have anything to do with the LCD display working? I’m tempted to try another P13USB but I don’t want to go through all that again if it is not possible that the problem could be related to it.

Can anyone please tell me what the red circled component is? I appear to have lost it 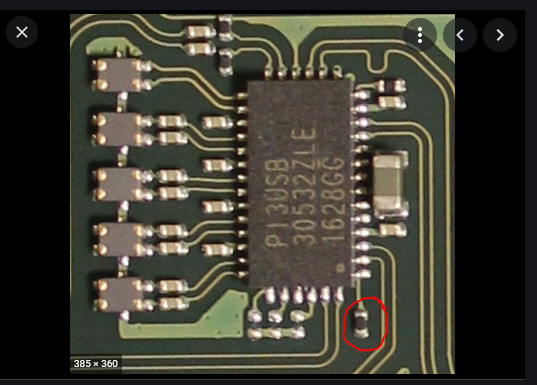 take the p13usb out , and boot the switch up. you dont need p13usb to boot up

Thanks for the reply.

Sorry it seems that maybe I wasn’t very clear on my issue. The Switch is actually booting and works.

I have noticed the internal lcd backlight goes off, then back on for a while, then off and repeats this cycle - not sure why that would be happening.

Looks like a resistor, on mine it measures 4.6k, so probably a 5k?

Thanks Insomniac I’ll try that and get back to you

installed resistor (thanks for the measurements, mine reads 4.7k which should be close enough) however no changes…

what did I do to screw up the Switch’s lcd screen?

Do you get a backlight? If not, can you see anything on screen if you shine a torch on it?

Yep, backlight is there.

Edit - I just realised you posted about it. Can you send a picture?

Yeah, I would be mostly suspicious of the LCD connector at this point…

kinda what I’m leaning towards too - I have previously replaced the lcd connector due to bent pins (which was in-fact the original problem) and I’ve gone over testing all the pins of the connector which are all still soldered, and no bent pins.

Are you able to upload a picture, looking into the connector on a microscope? A second pair of eyes never hurts

and maybe a photo from top, so we can see the pads.

I can confirm this. You do not need p13usb to boot

I’ve noticed a tear in the side of the lcd ribbon cable on the last attempt of reseating the cable, although I am unable to confirm if the tear was there before - seems possible. I’ve ordered a new screen. It would be good to know the pinout of the lcd cable, the side which has torn is the side opposite the fan (if anyone knows what they are?)

The little plastic tab which holds the lcd cable in place has also come free… so I may need to replace the whole connector as I can’t figure out how to insert it back in. because of this honestly I’m about to give up with this Switch, it’s giving me a headache.

Yeah, I have a couple of board like that… what makes it worse, is that I have forgotten which is which after putting them all in the same box… so will have to debug them again.

Getting the clips back on in the connectors is a real pain, though I have managed it before. It was actually easier on the LCD as there is more to hold on to. I think I ended up starting with two pairs of tweezers, one at an end, the other in the middle to line it all up, then switched the middle one for my fingers to keep it stable. Started in the open position.
I often end up just replacing the connectors though to be honest.

With the LCD ribbon, if its only a few traces, you could try scraping back the plastic and jumping the gap, though it is seriously fiddly. As you have one in shipping anyway, you could just do it to have a spare screen for testing with.

Just an update, sorry for the huge gaps in my replies it’s just very frustrating putting so much work into repairs and for all these ‘new’ issues to occur.

Anyway I can confirm that the replacement LCD screen works on the Switch; so it was in fact the old LCD screen all along.

I believe there was a small (micro) tear in the LCD flex cable, and with repeated attempts to reseat it the tear must have gradually got larger until I noticed it.

Had I noticed it earlier I may have been able to repair it - however there was about 6 tracks to repair and while I almost had it, it turned out too fiddly for me.

I had my doubts the replacement LCD would work due to only noticing a tear long after the ‘no screen’ issue actually began; I thought the tear was just bad luck and figured it was a separate issue. I ended up replacing the connector - again - just because the white clip had fallen off; and crazy as it sounds it was way easier to replace the connector than to refit the clip!

Another strange issue when testing was the Switch would reboot when putting it to sleep mode (every time). I was going to ask if anyone was familiar with this issue, but I figured I could just learn to live with it (since I was sick of working on it) and do a power off rather than sleepmode; as much of a pain that would have been. However, on reassembly, after I put the SD card slot back in, this behaviour vanished and sleep mode is working once again (anyone seen this before?).

So I can call this a success, I really did have my doubts but took a chance with what seemed to make sense thanks to the replies on here - it seemed most suspected the connector area would have been the issue (and not something further down the line).

Additional note, initially after replacing the connector I didn’t get a display, this was a depressing thought, but I saw some horizontal lines forming on the screen which was ‘something’ . I thought perhaps the screen was faulty. It turns out I hadn’t pushed the LCD flex cable in far enough - I guess I was worried about being too rough. Anyway to my delight after ensuring it was seated correctly I got the screen back.

So many things to be aware of. I hope never to have to open it again!