One step foward and two back with my Switch repairs

I’ve recently had to take apart my Switch for the third time or so. It had a blown speaker I’d been lazy with since I’m largely a dock player. I made a rookie mistake in letting the right rail roll out of place with it’s screws removed. The short fall broke the ribbon wire and the right side was no longer able to send a charge. I ordered the replacement rail as I knew it should be no issue as the right is far easier than the left. Long story short the new part isn’t sending a current, and my SD slot wont click back into place. I do not have magnification on high levels so I took some shots with my HTC 12 as it can capture a good amount of detail. I’ve got pictures of the pins in the SD slot on the part and the MOBO. I’m not 100% as to how the pins should look naturally, but here are some photos I got. Can anyone see what, if anything is keeping my SD slot from clicking back in? Also short sighted to leave the battery plugged in while plugging the new ribbon cable for the right rail, I know, but could that have shorted the part? I know the damage isn’t on the MOBO end as I so clearly broke the last rail. It’s worth noting I had no response to powering on the switch after replacing the rail. A quick unplug and re plug of the battery got it back up and running so that’s the gist of my situation. Broken speaker repair led me to a broken rail and issues with my SD slot. Even worse, I’ve opened up my switch at least 3 other times and didn’t fug up. This week is just not for me.

I can’t seem to get the two photos to post with this. Anyone who thinks they can help, please reach out.

Upload your pictures anywhere else and post the links here with an ‘_’ before the http.

Unfortunately the ribbon wire was severed from the rail end. The cable was still attached to the board though. I ran the replacement ribbon Identically to how the factory ribbon had been laid.

What is this on the left pin? 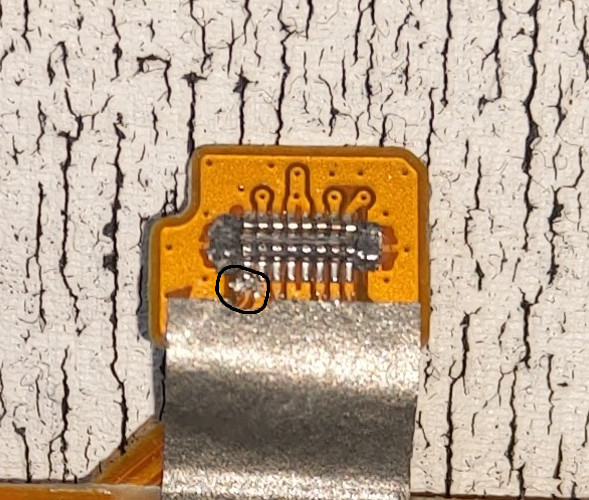 Small bit of that foil, from just south. I’ve cleared that off since the picture.

I’ve ordered a new SD slot hoping whatever the hold up is on the part end, not the MOBO. I don’t have the equipment to float anything off that.

Did you check the ribbon cable for propper sitting in the connector? There are two white squares on the left and right which should covered by the ribbon ‘ears’ if the ribbon is on its place.

I was just about to open it back up. Let me check.

It’s cool, I must have shorted the board this time. Sprinted through the steps and skipped the battery. Now the system is not responsive. Looks like I took this small issue all the way to the top. Yay. Thanks anyway

Oh no… sorry to hear.

If you want, you can sent me the mainboard and I will see what I can fix.