Recently replaced the HDMI on a PS4 (CUH-1115A) and afterward, the disc drive wouldn’t do anything. Wouldn’t accept a disc and hitting the eject button did nothing even when removing the bottom shell and pressing the contact on the disc drive daughterboard it wouldn’t do anything or even make a noise. So I replaced the disc drive with a used drive I had lying around and swapped the daughterboard from the original. While it struggled to accept the disc, the new drive would take the disc and read it and you can play the game. However, the eject button will not work but now when you press it it will give you 3 beeps so it is registering it but it won’t eject the disc. It will eject the disc if I do it using the controller and the options menu but not with the physical button or even touching the contact on the daughterboard directly, just get 3 beeps. I should also mention, I tried using the daughterboard that came with the used replacement drive and it would do the same thing, just beep 3 times and wouldn’t eject with the button. Any ideas? 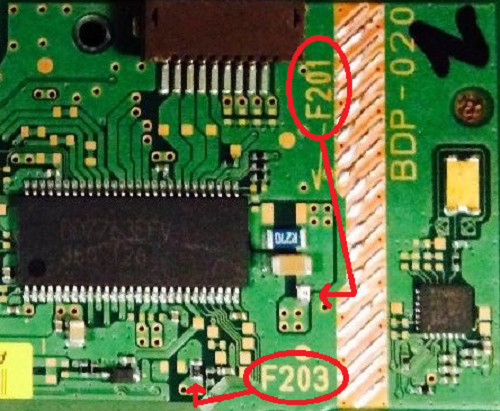 So I couldn’t find any issues with the fuses or randomly testing caps. I tried another drive and at first, it would accept the disc and read it but still only 3 beeps when trying to eject. I decided to just go ahead and swap the chip on the daughterboard to another board of the same model (BDP-025) and now it won’t do anything and seems to be killing drives because now the drive won’t accept discs at all even with a different daughterboard installed. I’m going to order a drive because I have been using ones I had lying around but I doubt 4 drives would be bad. I’m also going to try to get a different flex cable that runs from the mobo to the daughterboard. I’ll update once I have done that.

So I’m going to have to kick myself. I got the new drive in and installed it with the correct daughterboard and it did absolutely nothing. Swapped the daughterboard and it would make weird noises when the system was booting but still wouldn’t accept a disc and the eject button did nothing. So I finally decided to try replacing the one thing I hadn’t replaced that I should have replaced days ago. I replaced the ribbon cable that goes from the daughterboard to the motherboard under the power supply and everything works fine now. I looked at the original cable under the microscope and saw that 2 of the contact pins had been partially broken off. All that work and stress…but at least I figured it out.