Hello, I have a PS4 Pro 71XX which has some of the BLOD symptoms. When I power on the PS4 the blue light turns on, no blinking and after 20 seconds the PS4 turns off. During powering on I can hear a soft click from disc drive, the HDD starts spinning but fan won’t spin. The console is quite clean and someone has changed the thermal pastes and pads.

Do you know if this is one of those usual BLOD cases where the problem is in the APU/RAM solder contacts or could there be some other fault which prevents the fan start to spin?

Even if the extra washers on the clamp were to have resolved the problem (which is unlikely to begin with) it’s likely to cause more damage in the future as the board goes through it’s heat and cool cylcles and ultimately an internal crack, or internal bond wire break, or failed internal silicon (whatever) fails within the APU. though no way to know for sure tbh without an xray machine.

Anyway, the APU may not even be the problem, i don’t have a pro here so can’t give you the specific rails to check, but that’s your first port of call, btw this is the same deal as on your switch, measuring critial rails resistance relative to ground in order to narrow down the fault.

This clamp stuff has been a thing pretty much since the x360 days, and even then there was a lot of BS about what it is they were doing, same goes for the console “bakers” who didn’t understand the root cause of the fault and why the baking temporarily fixed the consoles… there was even whole youtube channels dedicated to this snake oil

Oh believe me when I say that I have seen plenty of idiots that think solder is the problem, and some of the “fixes” they do are complete BS. I remember seeing an image a few years back of someone using a blowtorch on a 360 heatsink to try and reflow it…

Haha would love to see that image.

Funny to think that the said youtube channels in question would net almost a quarter of a mil subs…(almost a cottage industry, wouldn’t be surprised if they made several hundred K on these “repairs”)…goes to show the naivety i suppose

Yup, that still happens on some channels today believe it or not. Also, I did manage to find the image I was talking about and I uploaded it here. 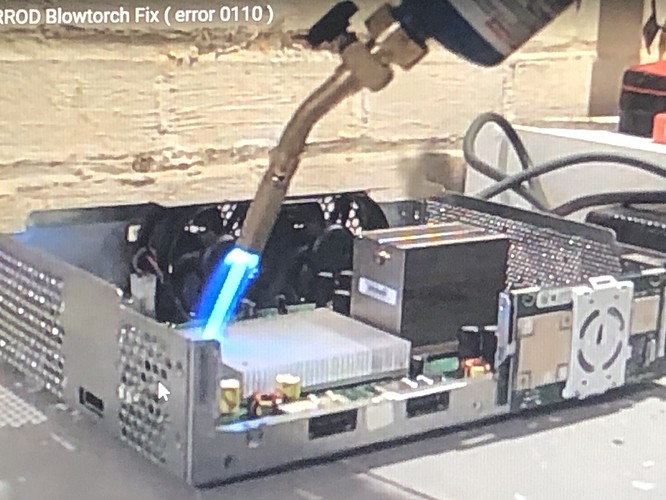 Should change this to my profile pic.

To the OP this isn’t aimed at you, these practices have been going on since the early days, a lot of it was in some sort of misguided belief that it was the LF solder causing the issues, though, even the consoles from the late 90s were transitioning to lead free and had substantially more BGA style components which still to this day are holding strong. The people in question and beginners will grasp on to the easiest and simplest explanation and solution presented (even if they are wrong)

Indeed it’s one of those APU/RAM solderball problem. But it’s likely on the RAM side, i already encounter this problem, no change after i reball the APU. I decide to give up since reballing each one of the RAMs is not worth it.

The clamp “fix” was my last resort as I wanted to see if the problem was on the APU solder contacts as this would narrow down some other problems.

this is the same deal as on your switch, measuring critial rails resistance

I went through the motherboard with my multimeter but I didn’t find any shorts and fuses were fine.

To the OP this isn’t aimed at you

I went through the motherboard with my multimeter but I didn’t find any shorts and fuses were fine.

The APU critical rails are typically present and represented on the bypass caps on the APU itself, you could start my measuring their resistance to ground, you could also buzz these out to the next nearest point on the board for easier access, unfortunately i don’t have a pro here so i won’t be able to confirm a good reading reading for you but perhaps xfreaks or RockL79 cn help you out if they have a known good. As for the other primary rails present on this board, I’d have to look at a regular PS4 and give you my best guesses

its not the solder balls, and it never has been. thats why reballing it didn’t fix it. the fault is in the flip chip itself, which needs to be replaced.

reballing is one of, if not the largest myths/scams in the repair industry