I’m having some issues with my PS4 Pro that I haven’t found mentioned anywhere.

The problem occurred after turning my PS4 Pro on when it was on sleep mode, it stayed on blinking blue lights without video. The console would eject the Bluray. I unplugged the power cord and plugged it again and the console turned on, but it wouldn’t detect the controller.

No matter what I did the controller wouldn’t sync with the console. I managed to use it with an arcade controller. But when I go to Bluetooth devices I get this error message:

I tried a new hard drive but the It always got an error without even starting when I tried it.

The last thing I tried was re initializing the console but it doesn’t work, the controller still won’t connect, and now the joystick won’t work, I’m stuck in the welcome screen after the initialization.

Any help would be appreciated.

I am by no means an expert but it sounds as if the chip in the pic has gone bad. yours might look a little different but they generally look like what I indicated. I believe this chip is responsible for the wifi and bluetooth communications. From what I have seen it is a bit of a pain to replace since it is a BGA chip which has a bunch of little solder balls that connect it to the board. It is not impossible to do if you have some experience or you might try taking it to a local electronics repair shop that has the correct equipment. 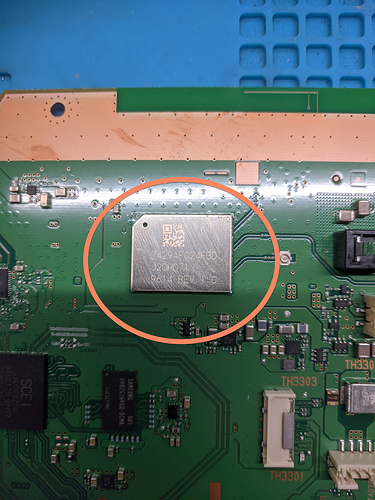