I have never had any issue since I bought it. Recently, it starts and runs normally for an hour or so, then it will reboot, but not totally… The white is still on, fan is running, even disk is still working. But the HDMI and USB port has no response, also controller lost connection and couldn’t connect back. Then I have to manually press power buttn to turn it off. After that, still able to normally start it and it will do the same after an hour… If I open up a game, it will go reboot less than 30 mins.

Just ordered it, it’s on the way

I think I still cannot address what the problem is. Please let’s go through the logic with me… First, it can normally start, so it means there is no hardware problem at least within the first hour, which means chips, motherboard, ports are not burned up. Second, I updated system, then it’s not a software problem. Then, what is the cause to make it abnormal…

I called a local repair store, the technician said the southbridge chip might be broken. I don’t think so… If it’s broken, then I won’t be able to turn it on or won’t be able to see the display through HDMI at all. I know why he said so, because the HDMI and USB port are no response at the same time, but there must be a trigger to make it off right? High voltage while playing maybe???

I just remember there was a power outage in my area few days ago. That might be a trigger… but still I don’t know which part is not working.

For those guys who have experience, please help me address the problem. I really believe I can fix it by myself. 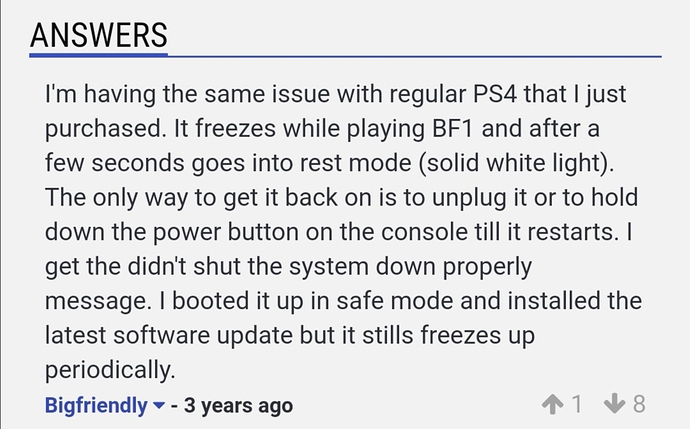 Same issue found on other forum, but without solution. 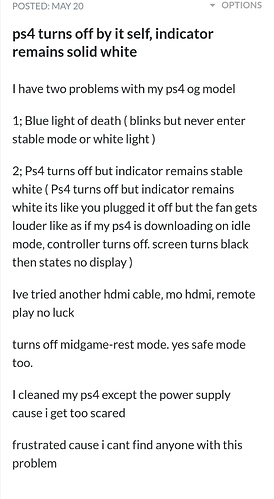 I don’t have the BLOD but the same issue of No.2, still no solution.

I remeber there was a lightning storm causing power outage, also ps4 pro was shut down while working because of it. This might cause some parts mulfunction, but it can still turn on and work fine for some time. When ps4 pro goes high frequency and need more voltage to work, then the southbridge related parts goes off, then the HDMI port, USB ports and bluetooth have no response… So, it will ‘turn off’ or ‘un-fully reboot’ but with the white light on.

This is just my guess… Still looking for a solution.

I’m going to try a new power cord at first, if it doesn’t work, I’ll try a new PSU… If it still doesn’t work, then I have to open it up, check part by part, or send it to repair shop… T-T

Went to a repair shop, reflowed the APU, but still not fixing it.

Also, I found it only shuts off while in a game. It has no problem watching youtube for hours… and it shuts off faster using 4k HDR TV than a 1080 PC monitor. So I would say this problem happened only while the ps4 pro handling intense graphical output…

Just a thought have you tried replacing the PSU? maybe if after a while the PSU is starting to over heat, maybe it can be verified, by running the system without the cover on and blowing a fan directly in the PSU vents, if it stays on, maybe it is worth changing then.

Thanks for your reply! I went to a repair shop and that’s the first thing they tried, it doesn’t work. Eventually, I traded it as parts. It’s time to move on to PS5.