Recently I received a Switch Lite which has been tampered with. Current owner says he attempted to install the SXOS modchip by himself, which went wrong. So he asked me to remove it from the board and I had to undo all the solder and flux leftovers.
The board is now free from the modchip set, but in the process I removed a capacitor, which I believe it’s a bypass one, by the screen connector and also another cap, a 0201 one, next to the microSD card slot (Check picture). 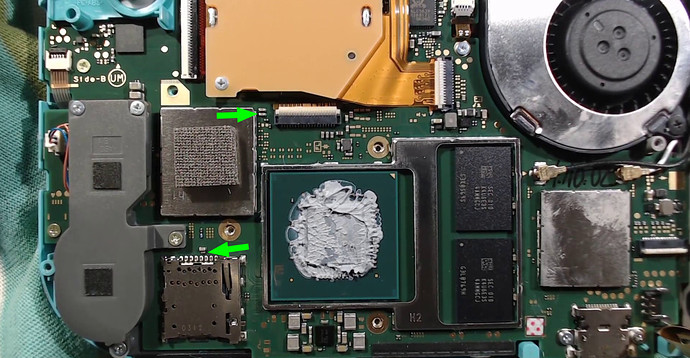 newissue011146×596 205 KB
Those have been fixed and new ones soldered onto the board. But now there’s a problem: I set the screen brightness to 30% and then start downloading a game and I let it enter sleep mode (while still downloading the game); If I press a button to wake it up, screen brightness is now at max and the slider no longer works - as if that wasn’t bad enough, there is this constant buzzing going on around the right side of the Switch, which involves the area where those caps have been replaced.
If I enter sleep mode again (this time, not letting the system do that over time - rather, I do it manually) and then wake it up the noise is gone, screen brightness goes back to 30% and the slider now works. Could that have anything to do with the caps I replaced?

PLEASE NOTE:
The issue I mentioned above happens over and over again. If the system is left downloading something while sleeping, upon pressing a button, the buzzing comes up and the noise is still there;

To better address this issue, I wanted to remove the wireless chip from the equation and now I let the system go to sleep with wireless off. Upon pressing a button to wake it up, there is no noise and the screen brightness slider does work;

I need to understand the source of this buzzing and why the screen brightness slider won’t work after waking it up. Any ideas?

I would focus on the backlight driver ic which is a small 9 pin BGA just above the connecting ribbon between the two boards. Normally part number starts with a U. This can be easily damaged with poor fitting of ribbon connector and may be triggering the two issues you describe above. The same part is used on the full Switch if you can rob one from another board, or I’ve found that a TI TPS61163A is a suitable replacement.