Hi! Hope everyone is ok!
Here for a little wisdom TwT

Kinda was changing the backplate and lower bar of the OLED to one extremerate sells and followed the video instructions bit by bit, first time opening a oled but used to doing these stuff, yet seems I made a mistake as I couldn’t turn it on once I closed off all and hit the power button

I hit power button and a small tiny noise can be heard which confirms is no buttons issues
Also tried to place it on dock to check on TV, no response but just a small blink of the dock that stays off and unresponsive unless is taking it out and back in
So no battery, buttons nor display issues

I have taken it to a repair shop but given the diagnosis I got told it might had short-circuited and burned something yet they don’t seems to find what and how, which lead to they said it should be checked by a motherboard specialist in fixing these

So question is, to someone with knowledge

Is it really possible to get it fixed if its trully a short-circuit? And without costing as much or more than a new one?

So any video or tips on how to check the motherboard parts and were would be appreciated if possible! I possess basic electronic knowledge and possess a multimeter, just never actually handled small electronics as these but just on radio and what not scales ^^;

Sorry if its too much unnecessary info or not told well but hoping is enough to get a grasp out of it!
Anything that can make easier to answer to this I’m willing to tell and if pictures are to be needed too!

Thank you for your time and what I hope would be a growing experience in what I like lots!

What exactly did you do?
Did you remove silver middle plate(with antenna taped on) and access anything under?
I don’t think any extremetate shell replacement would do anything onto actual motherboard

And just in case, disconnected the battery, kept my hands from touching the board as its parts in case I caused some damage touching only borders and screw only touch were it should

Tho I admit I wasn’t fully concentrated so may not had been as carefully as I hoped so X.x

Okay just saw the vid. So I guess is either the screen LCD connector damaged or something not connecting well. Hard to tell with looking into it.

Fair enough! I don’t really have the console now for pictures as were I left it for fixing were trying one more time to check for any damaged capacitors tho the story between the 4 I talked felt a little off to me ^^; 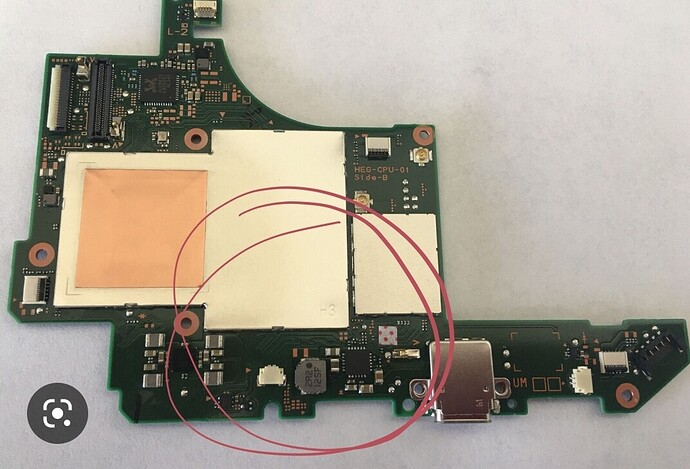 Yet when I plug battery in and hit power button, around area I circled on this internet image makes a tiny sound as if turned on but didn’t turn of despite my attempts at hard reset and what not ^^;

Sorry if still not that helpful info >.<

Least would be goods to confirm if its trully a short-circuit or of that sort given repair shop seems to be starting to fix switches just recently and no proper motherboard specialist fixer as they said to not have for this issue (despite the only concern guy that accepted my order had was on how costy would be) so felt I gave my console for a repair they knew they couldn’t do so I would pay the 20$ for checking/diagnosis of theirs ^^;

One question and I apologize for troubling you so much ^^; is it ok to ask here in tronicsfix for good trustworthy shops were I can mail in my nintendo switch for a fix?

Basically short-circuited issues on the motherboard that needs professional handling at this at this ^^;

Get a toothbrush an 99.9% isopropyl alcohol an clean the board really good!!!