Xbox One issues on the 5v line in standby

Hello folks,
I am trying to trace down an issue with an Xbox One that is driving me insane and at this point I’m not sure if its even fixable. The unit suffered from a bad power supply (confirmed when I tested that on a known working Xbox One). I replace the power supply with a working one and it still won’t power up. Tracing down some of the voltage rails from a nice map of them I found online, I came across an issue on the 5v line. On a working unit I measured in standby mode, there was no voltage on the left side of cap C4B2 (shown just below the tall aluminum cap). On this broken unit, there was 5v on the left side of that cap. I tried replacing U4B3 (which I believe to be a 2 diode package) and U4B4 (not sure what that one is for) but to no avail. Does anyone have any idea what might be causing the left side of C4B2 (and the components there like C4B1, R4B9, and C4B11) to be getting 5v? I have no idea where the vias on those other components connect to but I assume the problem lies somewhere with one of those. 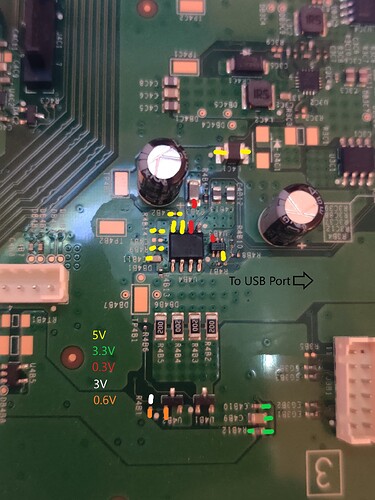