Hello, i have a switch thats not powering on. it had a faulty lcd connector which i changed.

there’s no shorted caps around M92T36, P13USB, BQ24193. the usb-c port looks good, no pins shorting to ground. have no problem charging battery.

M92T36 pin 6 has 0.68v even with power adapter connect and power button pressed.

Can you plug in battery and prompt the console to boot and measure the voltage at these two locations and let me know the readings? [3v3] [Switchre_side2]

connected the battery then the ac adapter.

So it’s likely the ENXX IC there is faulty or has bad soldering, but just to verify this, can you disconnect the battery/USB and put your black probe on ground and red probe on that cap in the image above (where you were reading 0.69V) and let me know the resistance in ohms

That’s good, that tells us with almost 100% certainty it’s the ENXX IC at fault,

Typically the IC is quite robust and doesn’t fail unless the cause was (often) extreme liquid/corrosion damage, you might want to inspect the balls below, as in most of the failures I’ve seen it’s been as a result of poor prior rework on M92 IC, for example someone who has used excessive heat and the EN IC on the reverse has became detached.

Replacing or reballing will require some prior BGA rework experience. though you may attempt a reflow first, though I would be careful here as a mistep could cause permanent damage to other areas of the board.

On the plus side, you can buy this IC preballed, which makes the job easier, the IC is a RP602Z330C which you can find on mouser or other.

what resistance value should i be expecting under that cap?

also looking at the chip i can see it’s chipped at one edge and also the cap at the top was missing.

thanks for all your help.

also looking at the chip i can see it’s chipped at one edge and also the cap at the top was missing.

Can you show a picture of this area so I can see?

what resistance value should i be expecting under that cap?

you mean where you were measuring 0.69v?

Can you show a picture of this area so I can see? 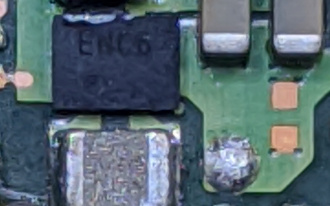 you mean where you were measuring 0.69v?

Judging by your image, the damage to the polymer top on that IC indidcates prior rework (aggressive tweezer action) so it’s likely a soldering issue on the IC

IC arrived and replaced and the switch came back to life.

thanks for the help Severence

That’s great news man, glad you got it sorted