I have unpached v1 with no info about it’s past.
It didn’t turn on, and had discharged battery.

Opended, and checked for shorts around m92t36, p13usb, bq24193 without success. There wasn’t any shorts near this chips. Tried another battery, still no success.

Replaced m92t36, p13usb and it still doesn’t work.
Booted into rcm (it had autorcm feature turned on), it accepted hekate payload, it charged (slow charge i think) to 100% at main hekate screen.

Trying booting into atmosphere ended with same result, blank screen after atmosphere logo.
Read about wifi ic failure prevent from booting, so I tried to boot the android from the SD card, and it booted with success, after that I tested wifi and Bluetooth - switch connected to the wifi and paired with a Bluetooth device.

After that my guess was that it’s a nand problem.
Tried to rebuild nand, no success.
After that my other guess was that it was flashed with different console nand, and maybe I don’t have a good prod.keys, found and video tutorial about fixing totally broken console with donor nand, firmware and prod.keys from a diferent v1 console. Tried that and it doesn’t boot, same result.

Do you think it is possible it’s a hardware issue with a emmc module? Any suggestion what to do now?
It worked in Android that surprised me the most, so I think maybe it can be saved.

Got 2x BQ24193 from aliexpress, I think it’s worth trying to replace it. I’m unsure is it a hardware or software issue. I would say software, but again I think it didn’t fast charge in hekate.

After few tries to boot to cfw it once it displayed a charging symbol on the screen just before it back screened again.
But other times it died just after the logo, without the charging symbol…

In hekate fuel gauge ic info shows that battery capacity (design) is 1000mAh that doesn’t seems to be right. Bq24193 or max17050? Or something else? 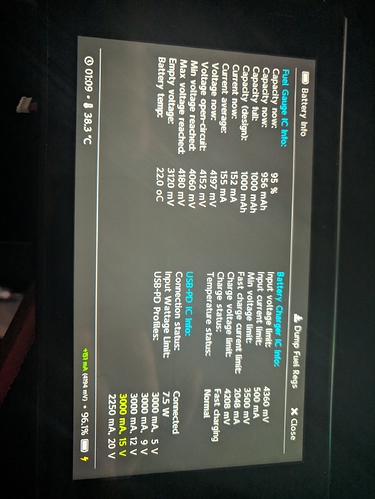 it’s normal for hekate to display 1000mah as far as i know, sometimes it just needs to be cycled to give the correct readings. Also make sure your using the latest version as it seems to provide more consistent and accurate readings.

Thanks for your reply…

I’m using hekate 5.3.4, I have a autorcm turned on, and can’t boot from the hekate to ofw or cfw (when I tried to turn it off, switch was turning off after nintendo logo, as it does now when running from hekate).

NXNandManager when opening boot0 dump display fw 8.0,
rawnand 8.0.1, fuse count in hekate 9… 9 seams to be ok for 8.0.1, not sure why I have diferent fw ver according to nx on boot0 and rawnand.

Dumped keys using lockpick_RCM, when I import them to NXNandManager, I don’t see any errors or missmatch.

Not sure does it confirm matching emmc and soc, or should I check something else…

Are you sure about that 1000mah display? 6/6 booting into hekate displays the same readings.

Battery info from the other working v1 - first try. 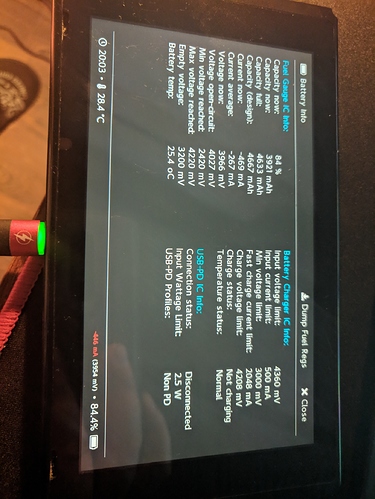 yeah pretty sure, think the cycle count is logged on or from fuel gauge… possibly BQ… don’t rremember off the top of my head, the battery is serialized. I’ve had a few boards do this from memory, you’d need to cycle the battery from 0 to 100 at least once. You could always reball it if your concerned, pretty easy on this chip or take diode readings on the surrounding components

Use biskeydump, if you get a smiley face then the EMMC module matches the SOC key, if you get a frowny face the module is not a match, take a pic if you want me to confirm, think it displays red if no match and blue is good, from memory anyway.

Biskeydump is a good choice for another reason, sometimes you can observe graphical glitches on the smiley face emoji which would point to a bad SOC…not always but sometimes.

I don’t recall if NXNandManager takes decimals into account when displaying FW version for boot0, so likely not the issue. Again from memory, if you load prodinfo with the correct keys in NXnandM you get more accurate FW version info.

Are there any indicators of the bq24193 being reworked? i had one case where a pad wasn’t making contact due to bad rework which can also cause the typical 0.4A draw and nintendo logo… doubtful considering hekate is displaying correct info but worth checking.

You could could check the voltage rails on MAX PMIC on the rear of the board, check on the inductors, should have (from memory again) 1.35V rail which is ram a 1.15V rail and a 1V rail which is SOC and Ram and a 1.8V rail which is numerous including EMMC. If all good then measure resistance to ground on all the inductors and post the results, don’t panic low values are normal.

Out of interest do you happen to have a v2 maiko board handy?

I had a switch with this. Replace Bq chip due to another issue, switch was working fine prior, after replace , I got Nintendo logo then Black screen. Went back and touch up all the connection on the BQ with soldering iron n it worked as normal