A month ago I received an OLED Switch that was in a house fire. I was able to get it working after cleaning out the corrosion and replacing the battery. Switch works fine and haven’t had any issues other than it not being able to read micro SD cards. There isn’t a lot of documentation on OLED repairs so I’m kind of going at this blind. So the OLED switch uses a daughterboard for the SD card and game cart reader. 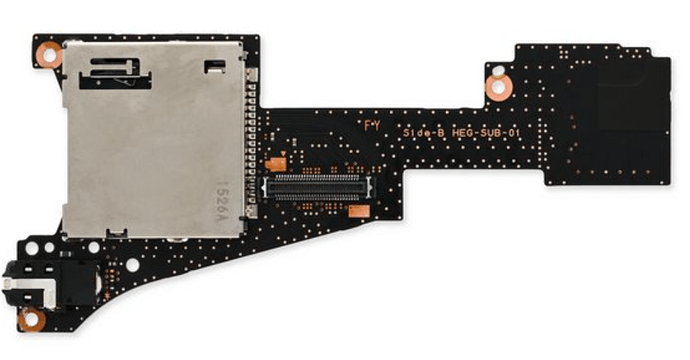 Oddly enough, it reads game carts fine so the daughterboard gets some form of power. Perhaps the biggest hint as to what’s causing the fault is that the cap under the SD card reader (I THINK) needs 3v3 to read cards but what’s happening is when I turn the console on, 3v is present at the first Nintendo logo, then disappears once the 2nd logo and OS is fully loaded.

Updates:
The headphone jack also works fine.
The “unable to access microsd card” error comes up even without a micro SD card inserted.
The error doesn’t come up at all when the daughter board is disconnected from the motherboard. 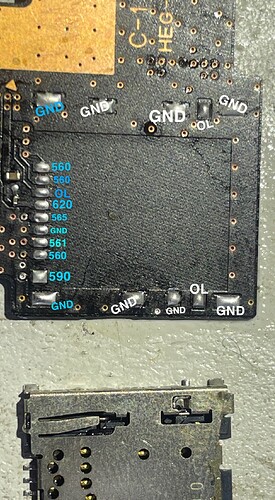 Thats CMD line from OG switch pinout, so it should not be OL I believe

Yes, checked with a lite just now and it shouldn’t be OL. Any ideas as to what I should do next? Is CMD some sort of voltage rail?

CMD is signal line from soc straight, check if daughter connector or the trace alone

I believe this resistor connect to CMD and since it reads a diode value of 274 on the left pad and 588 on the right pad, would this imply that the CMD line itself is faulty?

Also, this cap has both pads connected to ground. I don’t think this is intentional so is it a ground short? 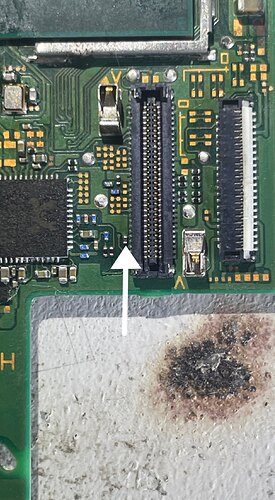 I believe this resistor connect to CMD and since it reads a diode value of 274 on the left pad and 588 on the right pad, would this imply that the CMD line itself is faulty?

I don’t think mod chip cmd line is same as sd card cmd line,even though they all called CMD.

Gotcha ok. So since all the other pads have a normal diode reading, its probably safe to assume that the connectors are fine? Physically they both look fine. So I suppose I should give an APU reflow a try?

I would make sure MB side CMD line corresponded pad having continuity all the way to sd-reader pad first.
Most time “looks good from eye” got tricked easily

Right ok, would you happen to know which trace is the CMD trace? I can’t find a datasheet for this particular connector.

Sorry nope, barely any oled came to me for repair, and nothing from community online

No worries. So I soldered a wire to the CMD pad on the daughterboard, wrapped it around one of the probes then started probing the male connector. There was no continuity between the pads at all. Would these mean faulty daughterboard?

Likely, if device been water damage around daughterboard, CMD line maybe on through whole trace and got corroded inbetween. Do you have hi-res front and back shot of daughter board?

Yeah every other pad has continuity with the connector besides the CMD pad. No hi res pictures but these are what I can get. 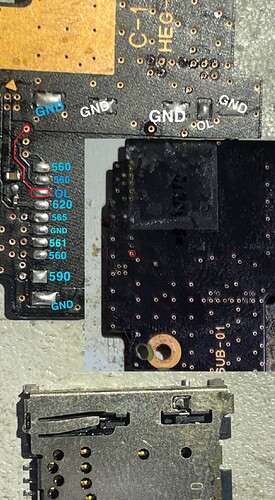 Yes there is continuity. I’ll start soldering some jumpers tomorrow to see if I can’t save it. Thanks for the help!

Went ahead and soldered a jumper and the pad now has a diode reading of 617. Now I’m just trying to figure out why the voltage drops from 3.3 to 0 on the cap under the sd slot.