I had a switch come in for charge port replacement that hadn’t been used for over a year. It boots on a new battery, after replacing the charge port the switch fluctuates from 0 to 0.07amps on a 5v charger without a battery, connected to a new battery it charges at 0.46amps, drops to 0 but instead of switching to fast charge it returns to 0.46amps.

When installed into the housing and turned on it only pulls 0.9amps and gives an on screen message that it is unable to charge with an ‘x’ beside the battery icon.

I then redid the port and confirmed continuity from both cc lines to the M92T to have the same result. I found a few shorted caps on the board (by M92T, 3IEU, and ENIJ)and followed them around removing the adjacent chips and the caps themselves for good measure to no avail.

The circled caps are when I found shorts to ground, anything with an arrow was removed to retest for shorts (along with BQ24 which has no shorts and a few other components for good measure).

Any insight here is much appreciated as I’m entirely at a loss.

Would appear your short is on the 3V3PDR.

If after removing both the P13 and M9 IC’s the short remains then it points to an issue with the “ENXX” IC and will either have to be reballed or replaced…depending.

It also won’t hurt to check continuity from battery terminals to their respective destinations just so we can rule that out.

No offense, but your USB replacement doesn’t look to healthy can you take a photo of it and the surrounding area front and back as i suspect further issues will arise later if unchecked…not a huge issue if it’s your own personal board, but definitely an issue if it’s for a client/customer as you imply.

And the above is assuming your measurements/tests were done with the EMMC module disconnected, which if bad can commonly cause a short on this rail also.

Unfortunately yes, the shorts are still there without the EMMC.
Is there anything that stood out to you as problematic on the USBC? Though I
have removed and reattached this one to confirm it wasn’t the issue. httpss://imgur.com/a/nXl4VQh

Is there anything that stood out to you as problematic on the USBC?

I take it back, i thought i saw something in your previouse image but your updated pics look fine (maybe just add a tad more solder to the upper ground tab slots later). As long as regular leaded solder was used and not low melt you should have no future issues

Unfortunately yes, the shorts are still there without the EMMC.

Hmm, and i take the short was still present with both P13 and M9 IC’S removed (at the same time) too?

If yes then it’s a tricky one as there’s quite a few things connecting to this rail, do you have experience reballing and have the necessary equipment? just want to make sure before i offer further suggestions.

Yep, with both off the short still exists.

I’ve done some iPhone audio ics and Tristars, have a solid microscope, hakko rework station and iron (though no micro pencil), and solder paste, I’d need to pick up some stencils since the only ones I have are for iPhone.

I did catch something strange today, one of the caps below the BQ chip (the top left of the cluster of four) does not beep in continuity mode, it shows 2-4 M ohms of resistance on both ends.

Good stuff, you should have no issues then.

I’d need to pick up some stencils since the only ones I have are for iPhone.

Before we remove the “ENXX” IC can you take resistance measurements relative to ground on it’s surrounding components (both probe polarities) and post your readings. Further info can be found here by clicking on the below topic

did catch something strange today, one of the caps below the BQ chip (the top left of the cluster of four)

Can you highlight this capacitor in an image, and I’ll verify

I can grab the measurements later today or tomorrow.

The cap in red below shows no response on continuity and reads M ohms of resistance to ground on both ends. 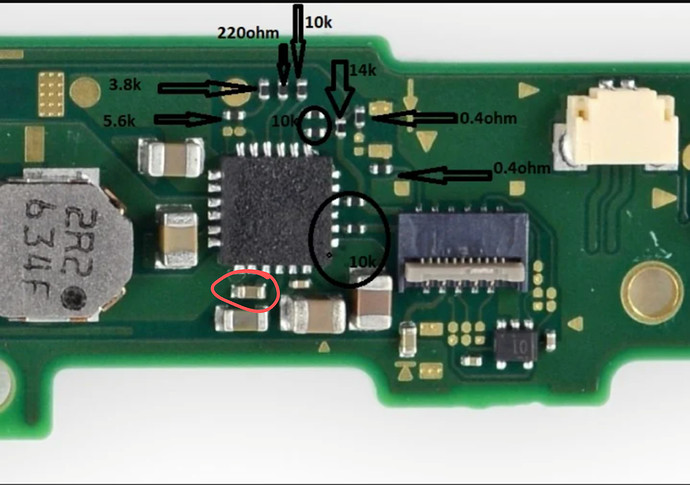 The cap in red below shows no response

It’s not a bypass cap but an “in line” cap and as such has no direct connection to ground hence why your not getting definative or substantial measurements relative to ground. According to the datasheet it’s connected to BTST and SW (of BQ)