Switch doesn't turn on nor charge

Hello everyone,
i am new here, discovered the forum through the videos on Youtube about Nintendo Switch repair. I am an IT guy, working in a software company as product manager for the mobile and web application. I am passionate about computer in general of course, but i do love electronics as well as mechanics as hobby during my too less spare time unfortunately.
Recently, i bought 2 broken Nintendo Switches, to have some parts for the one of my kid, and they were quite cheap.
Once i went back with them, i wondered if i couldn’t even fix them and tried to do so.
The first one had a broken USB type C port, i slowly bend back the pins to their positions without breaking them, and tried with a charger, the console is working fine, i ordered a new port and will change it later (i fixed it temporary like that just to make sure besides the port it is all good). The second one was weird. The port looks ok, i plugged the official charger in, and the battery symbol went on. But after a while, it disappeared. I measured the battery, and it was really dead, something like 3.5V if i remember correctly of even less. I had a replacement battery laying around, and when i tried it, the Switch did started and all was good, the console was fast charging, the percentage was going up, all was good so far.
Then i externally charged the original battery, and plugged it back, it was working as well. I left if like that on the charger for a while, all good. Then i wanted to go back to bed, and instead of leaving the console on the charger, i placed it in the dock, because i needed the charger for something else.
In the morning, nothing, black screen, console isn’t booting or doing anything at all. The battery looks fully charged, 4V when i measure it.
I started to look to short capacitor on M92T36, BQ and P13USB, nothing. All caps have the good measure, no shorts nowhere. I checked pin 6 on MT92 chip, i have 3.2V which appears to be ok.
What would you start to look at ? I noticed that a cap around the BQ has a slight different color than the others, should i suspect that chip ? Thanks for the help, not sure how to post pictures outside using an external service, if that’s the only way, i will do that ASAP. thanks again for reading me.

Forgot to mention that the coil is good, i tested it. And the readings now on the USB tester is 5V 0.4A. I noticed that northbridgeFX on youtube had a similar Switch then this one, and he changed the MT92 chip to fix the issue, not sure what it is worth it ?

Also, i saw in a lot of posts Severence reminding people of checking the primary rails in older posts, i tried but didn’t find really a post where a get a clear howto, maybe i missed it ? There was a post from an Italian member where it is pretty well explained, but just to make sure, measures are taken in diode mode to the ground without the battery, right ?

Ok, was just checking this wasn’t a meter issue. Remove the board, flip over, measure resistance relative to ground at the points highlighted in the image. Note this is a Lite board but the points remain the same. [b4d741c8401e9dd6c0d5134bf42e332f112b37e8] btw, was this a gradual fault or instantaneous? was there anything that happened which could have triggered it, for example a drop, liquid, bad USB etc?

measures are taken in diode mode to the ground without the battery, right ?

No dont take any diode/resistance measurments with battery/power connected to the board, you’ll just damge the board or your meter.

That was my guess too, never did it with the battery in, no worries. It was just to make sure.
Regarding the measures, this is the current reading i have on the board without anything connected to it. 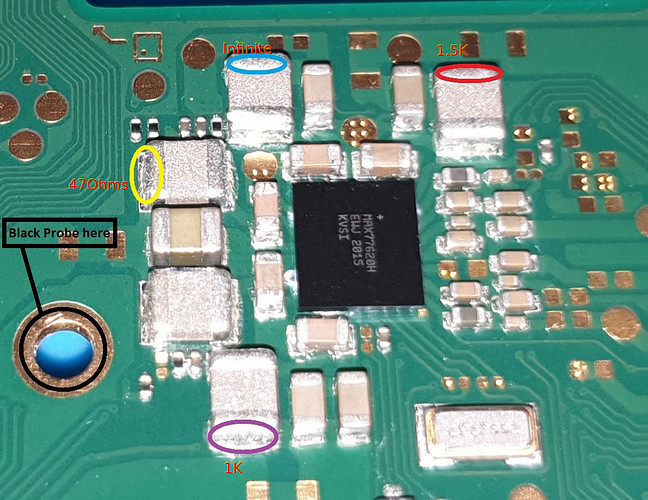 Max77620h1210×933 337 KB
I will say it happened gradually, but quite fast without being all of a sudden. The point is that i did succeed in booting that console up after buying it by putting a charged battery in it. Then i just boosted a bit the original one, make it boot, let it charge to 50% and then placed the console which was working good until then in the dock. From there next morning, the console didn’t powered on anymore and the battery measured 4V on the motherboard connector.
mauro2319 September 17, 2021, 7:40pm #6

By the way, all the current pictures of the board, forgot to mention also that the board is super clean, no trace of any liquid damage or whatsoever.

And finally i checked on USB Type-C the values in diode mode with red lead on the ground according to the post from Alexa in the same thread as you gave me, all looks in the same range as the screenshot attached

your 1V8PDR (red) seems low, would normally expect somewhere in the region of 10/12K here or on some meters possibly 5K

If you have another board, cross compare your readings on this rail to verify if it’s your meter at fault

I would also inspect the usual suspects such as bent LCD pins, chipped/cracked fuel gauge, removing the EMMC module and measuring that rail again.

Hi Severence, sorry for the late feedback, but i worked all day, today was car fixing

Ok so my bad, some of the values above are wrong, don’t know what i did, i checked again and made a new report that i triple checked and i am sure about it.
I also compared with a good board i have and i see pretty similar value, except for the purple where the bad board is 1K and the good is 1.5K, so not sure if that is relevant or still in the good range.
Also, the red was behaving weird, it was fluctuating a lot from 1K or similar to M Ohms, then slowly going down to 10K if i remember correctly, and finally get stabilized around 33K for both board exactly the same behavior. Not sure if this is due to my multimeter, i checked with a Uni-T and a Fluke, same stuff i noticed but the fluke was stabilizing much faster, besides that the fluke ended with 23K instead of 33 for the Uni-T… 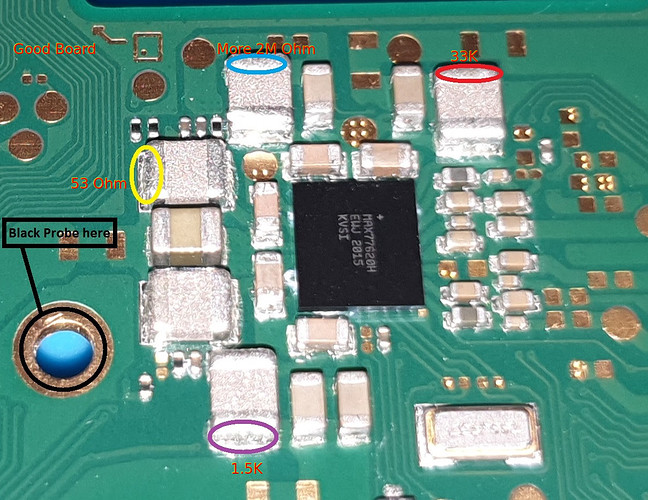 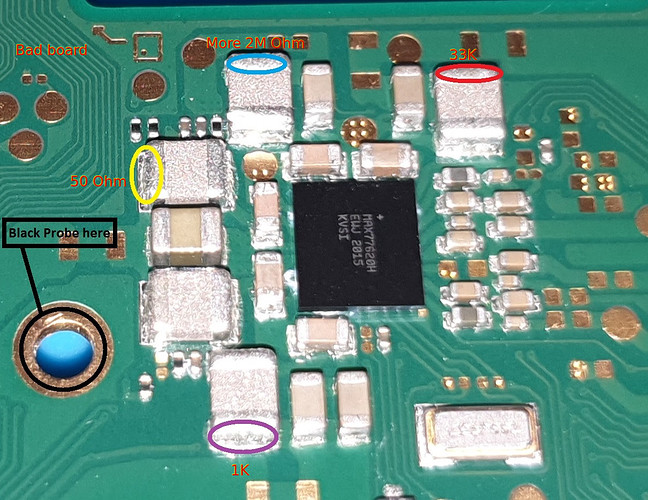 Can you take a closer photo of the fuel guage? I would inspect for any chips or cracks here as that could cause your current symptoms of black screen.

That cap middle left of the BQ IC looks to have a scratch on it, might be a good idea to measure the resistance across it to validate the SYS rail is fine.

I suppose a bad BQ or M92 IC could also be the cause, though you do typically see the first boot logo in most cases when they’re at fault but this might be the exception

Hi Severence, it looks like you really have a god feeling about my switch and really fast. We agree that the fuel gauge is what i would consider the battery connector, right ? At least that’s what i understood from your previous post, where you were already pointing me in that direction, therefore i inspected that area now that i have a microscope, and i found 2 cracks there. I placed some flux and remade the soldering, console is up and running now. The scratch on the cap was me, with the multimeter i ripped it a bit making the continuity check for a shorted capacitor. I will make intensive test now to make sure all is good, and if yes i will mark the post as resolved, thank you so much again

I’m really glad you got the problem resolved

Ok, i was not even close about what the fuel gauge is haha

Realistically for a fuel gauge you would just buy a replacement, rather than reballing your current one, and they come with the balls already on them. So you just need a hot-air station.

Awesome, thanks for the info, i didn’t know it was already coming with the balls makes it much easier. Guys, let me tell you how much i appreciate on first sight this forum, in all stuff i touched so far for which i needed to get advises on forum i had a so good feeling, from retrofitting new modules on cars to troubleshooting electronic stuff in general. Great community i am glad that i discovered this forum, will try to lay around more topics to get some experience, i can’t make any promises, really busy with building my house with my father most of the time but at least i will do my best. Cheers.